A New Keswick MFH: Her Story 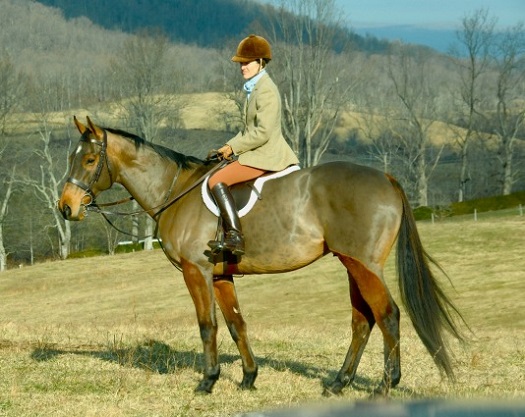 If you are wondering where in the Keswick countryside the cover picture was taken, you are observant. It was not taken in Keswick but at Massie’s Corner in Rappahannock County where I grew up. My father, Wade Massie, loved to hunt foxes. My Uncle Jim tells how Pop used to get on the school bus in the morning and get off a few stops later where there would be a horse waiting for him. He would hunt all day with Ennis Jenkins, Larry Jenkins’ father, and get back on the bus in the afternoon. His parents were none the wiser.

Later Jack Bruce helped Pop put together a pack of hounds which Clint Eastham, son of famous hound breeder C.C. Eastham, would hunt for him. (It is kind of fun to think about how I would hunt with hounds and people with a lot of the same bloodlines sixty years later).

Pop also hunted with Rappahannock and was a whipper-in there. Current Rappahannock Master Oliver Brown likes to tell a story about how Pop could make any horse quiet. One day a visitor from New Jersey had come down to hunt. The visitor's horse was rank, while Pop’s was going along well. Halfway through the day Pop offered to switch horses. By day's end Pop’s new mount was going along on the buckle, and the visitor’s horse was jigging all around.

Larry Jenkins? What about the far more famous Rodney? That's like referring to Dom DiMaggio instead of Joe.
Reply
# Guest 2015-08-06 11:29
Larry Jenkins is the foxhunter. Rodney, not so much.
Reply
Refresh comments list
RSS feed for comments to this post