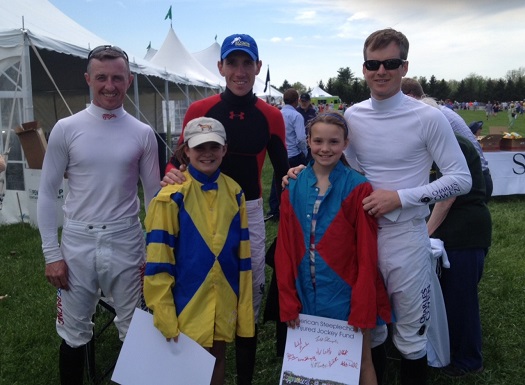 At the Calcutta party the night before the Blue Ridge Fall Races this year, racegoers will bid on the jockeys instead of the horses. A number of jockeys—among them Robbie Walsh, Willie McCarthy, Jeff Murphy, Kieran Norris, and Zoe Valvo—will attend the affair to mingle with the crowd and help promote their very own cause, the American Steeplechase Injured Jockeys Fund.

The Calcutta will take place on Friday night, September 19, 2014, and the races will go off on Saturday, September 20. The Blue Ridge Fall Races traditionally support local charities, but this year a portion of the race revenues will be donated to the Injured Jockeys Fund, a relatively recent endeavor that is gaining momentum under enthusiastic leadership.

For every jump jockey who rides races it’s not a question of if; it’s a question of how often he or she will fall and whether or not there will be injuries. With thousand pound Thoroughbred racehorses all galloping to the same fences at thirty-five miles an hour, falls and injuries are part and parcel of the game. And some injuries turn out to be life-changers for the jockey.