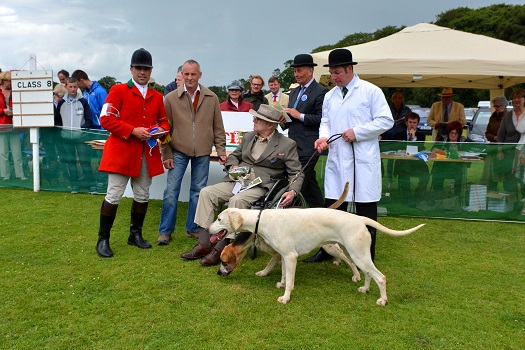 The above photograph caught my eye because of the man in the wheelchair, Captain Tom Morgan. The photo is one of several sent by photo/journalist and author Noel Mullins, a regular contributor to Foxhunting Life, reporting on the National Irish Masters of Foxhound Show held on Sunday, July 6, 2014.

Captain Morgan, now in his mid-nineties, is one of the few people still alive who intimately knew and worked closely in his hound breeding program with the late Isaac “Ikey” Bell, father of the modern English foxhound. The only other living individual I know who knew and benefitted from his relationship with Ikey Bell is Ben Hardaway, also in his mid-nineties.

He was still fully engaged and committed to the betterment of the modern foxhound to the very end of his life.

During the last three years he twice travelled with friends to the Ballymacad Hunt Puppy Show on the Westmeath/Monag han border to see produce of a direct West Waterford\Harda way line. There he enjoyed wonderful hospitality amongst friends and hunting folk. Many knew him well, or had certainly heard of him. His fame went before him.
Reply
Refresh comments list
RSS feed for comments to this post