How to Find Our Old Articles

Since we posted our first article on Foxhunting Life five years ago, more than five hundred articles have been published. And they’re all still here...easily recovered.

There are four ways to find an old article: the Search function, the Full Article List, the Hunt Club Pages, or by Category. Hunting Horn Ringtones on your iPhone! 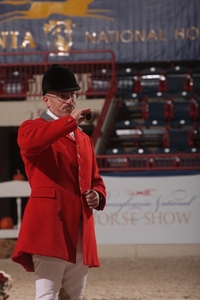 Huntsman John TabachkaWe finally worked it out: how to download our horn call ringtones to an iPhone! So many people have asked, and here’s how. But first, a story.

I tried to phone Steve Price, a member of Foxhunting Life’s Panel of Experts, but he was out. I left a message asking him to return the call on my cell phone. When his call came, I happened to be in the stall with my retired hunter, Guitar. Upon hearing the ringtone, "Gone Away," old Guitar pricked his ears and took a couple of lively turns around the stall! I laughed and explained the scene to Steve.

“You should have given the phone to Guitar and told him, ‘It’s for you,’” said Steve.

FHL's ringtones are the brilliant horn work of John Tabachka, huntsman, Sewickley Hunt (PA), a two-time winner of the National Horn Blowing Contest at the Pennsylvania National Horse Show in Harrisburg. (Click to view FHL's popular video, Calls on the Horn, in which John explains the meaning and usage of the principal horn calls heard in the course of a day's hunting.)

What follows is the ringtone download procedure for iPhone users only, and uses M4R files required by the iPhone; most other cell phone users should use the mp3 files that we have made available for some time now. (Note: This "read more" link is open to all viewers.)