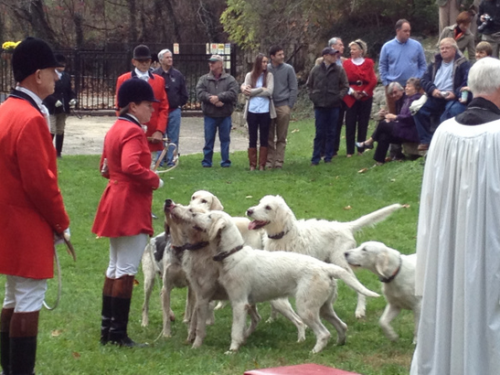 It’s gratifying when sportsmen and women whom you have long known and respected are elevated to loftier positions in their hunts. Lilla Mason, former whipper-in, currently huntsman, has been named MFH at the Iroquois Hunt in Lexington, Kentucky.

Lilla is a soft-spoken and thoughtful woman who has earned her way by performing superbly at every stage of her foxhunting career with Iroquois. The first time I hunted with Lilla was in 1998, she was whipping-in to Jerry Miller, MFH at the time, and I had been invited to ride up with her.

As we headed out she turned in the saddle and said, "Be careful in this piece of country. You could get stuck in a bog."

"Lilla," I replied, "if I wind up in a bog, then you'll be in it too, because wherever you are, I'm going to be right beside you."

I was mounted on one of Jerry’s horses—Furrier—little knowing at the time what a compliment that represented. What I did know was that Jerry had told me once—in a bar somewhere—that all his hunters went in rubber snaffles. I accepted that for what it sounded like—probably a bit of a stretch but what the heck, we were in a bar after all.

Sure enough, though, Furrier’s bridle was equipped with a rubber snaffle. The next day I rode another wonderful horse named Disney and found him equipped with the same standard-issue rubber snaffle as well. But as I got to know Lilla better, I was no longer surprised by those things about her that impressed me. She found and made Jerry’s horses and was obviously a superb horsewoman as well as a splendid whipper-in, always scanning the pack and making corrections before problems developed.

So it was only natural that, when Jerry was injured some years ago and a huntsman was needed to fill in, Lilla got the call. She filled in so competently that she ultimately earned permanent possession of the horn as honorary huntsman. Am I surprised that Lilla is now MFH of this first-class hunting establishment? Not one bit. Just full of admiration.

+2 # Jane Winegardner 2013-09-09 07:15
Dear Norm
Very well done and you are correct on all accounts..I have great admirations for Lilla!!
Jane Winegardner MFH
The Woodford Hounds
Reply
# Lizi Ruch 2013-09-10 09:45
Norm-wonderful- as always-sure wish I had been blessed to ride with you when you were put this way-miss the hunting we were so blessed to be able to enjoy before all our territory and space became so compromised with all the real estate development out here-thank you for keeping up your great fox hunting news and monthly letters-just printed one to share with friends last week
Sending you the best always-
Lizi
Reply
Refresh comments list
RSS feed for comments to this post