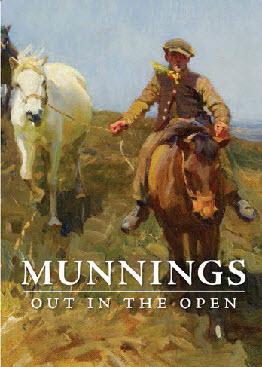 We have all admired the paintings of Sir Alfred Munnings and his portrayal of the horse in motion—flowing, graceful, muscles rippling, indescribably beautiful. Not to mention his figures of elegant ladies riding sidesaddle and his scarlet-coated huntsmen. Lovely paintings, but being unfamiliar with the artist as a man, I saw them in only two dimensions.

Then the National Sporting Library and Museum (NSLM) in Middleburg, Virginia mounted this once-in-a-lifetime exhibit of almost seventy Munnings paintings with revealing descriptions of each work, and the man came to life for me. And learning about the man brought the paintings to life.

One of the elegant ladies riding sidesaddle is Munnings’ first wife, a troubled soul who attempted suicide on her wedding night. This part of Munnings’ story is told in Jonathan Smith’s fascinating book, Summer in February, just released as a motion picture. Other paintings of lady and horse are of his second wife. Looking at the paintings of these two women with my new-found knowledge, the differences in mood and tension were there to see. 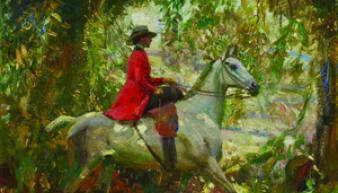 His oft-painted scarlet-coated huntsman, as I learned, was a favorite model of Munnings named Shrimp—a cocky gypsy, often drunk. Munnings, who required his models to stay motionless on their horses for hours on end, loved to paint Shrimp for his ability to handle any horse in any situation.

Munnings was a complex man who enjoyed great success and devastating losses. He was boisterous, confident, loved his friends and a good party, and loved his foxhunting. After a great run on a brave fox one day, he stood on a cliff above the sea, between the huntsman and the fox and roared to the world his insistence that the fox be spared. The fox was left, but Munnings was banned from that hunt until many years later after he had achieved great fame.

An artist of the Impressionist school and a man of passionate artistic convictions, he used his final opportunity to speak before the nation as retiring president of Britain’s Royal Academy (1949) in a drunken and rambling rail against the new wave of Modern Art, which he despised. Winston Churchill and Field Marshall Montgomery, among other British luminaries, were in the audience, and he knew very well that he would be excoriated by many for his choice of subject and his outrageous conduct at this august affair. (Churchill enjoyed it!)

Of the thousands of letters from home and abroad that he received in the aftermath of his speech, one was from his old friend, the celebrated English artist, Dame Laura Knight:

I recommend the book (I haven’t seen the movie), and I urge you not to let the NSL&M Munnings exhibition close (September 15) before seeing it. It’s unlikely you will ever have such an opportunity again. 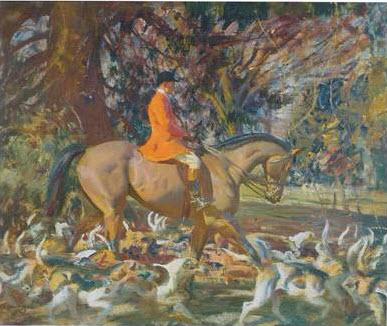