Thoroughbreds: Kings of the Hunting Field 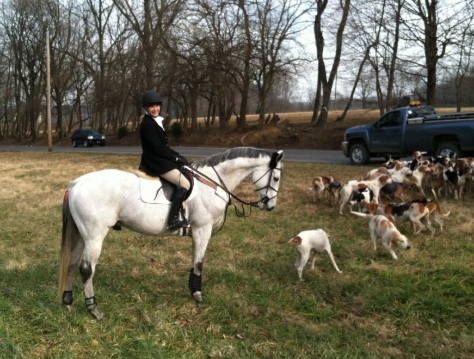 Nina Siepel on Steppenwolfer, out with the Cheshire hounds this year

Consider the happy life of Steppenwolfer (by Aptitude out of Wolfer): lots of treats; a big field with clover and buddies; and, from September to March, running around the countryside with a lot of other horses chasing a pack of hounds. A far distance from running third to Barbaro (by Dynaformer out of La Ville Rouge) in the Kentucky Derby and second in the Arkansas Derby in 2006.

Gelded and purchased by Gail and Dixon Thayer as a steeplechase prospect, his short steeplechase career wasn’t as stellar as hoped for. But he’s one happy puppy now. And Nina Siepel, who hunts him with Mr. Stewart’s Cheshire Foxhounds (PA), always wears a big grin, as if she still can’t really believe her good fortune. I’m not sure who is the luckier of the two.

If you read through the old Chronicle of the Horse Hunt Roster descriptions of top Mid-Atlantic hunt clubs like Elkridge-Harford and Green Spring Valley in Maryland, Mr. Stewart’s Cheshire Foxhounds in Pennsylvania, and the Piedmont and Orange County in Virginia, you might see the sentence, “Thoroughbreds preferred.” This might sound a bit strange until you have a screamer of a day running and jumping big fences for miles and at the end of the epic run you notice that the only horses left with you (and still raring to go!) are ex-racehorses. And, often, ex-stakes horses. These are the real horses of the hunt field. And, boy, are they fun. On big days (Opening meet, Thanksgiving) at these hunts, the big guns come out, and you aren’t really anybody unless you’re on a Maryland Hunt Cup or Virginia Gold Cup horse...or maybe a Dynaformer.

For less deified hunt members, it’s not unusual to take a fresh off-the-track horse out hunting to learn about running over terrain and jumping. Sort of trial by fire, but they take to it like kids take to candy stores. After all, what horse is better suited for galloping in a group than a horse bred to gallop in a group? My newest ex-racehorse, Should Expect (by Proud Citizen out of Should Excell), was an insta-hunter, breaking his “post and rail virginity” on his fifth day out. 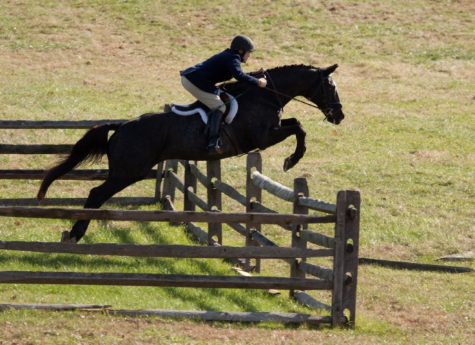 The author's old timber horse, Holzmann (19), out with the Genessee Valley Hounds

Why on earth would anyone need to go to Ireland to buy a hunter when there is an abundance of potential hunters at racetracks in their backyard? I don’t mean to diminish old Dobbin (or William or Woody). They are great, but so are the many horses that groups like New Vocations, Mid-Atlantic Horse Rescue, CANTER, and other racehorse re-homing groups are seeking jobs for. A lot of steeplechasers go hunting after they retire from racing. It’s a nice life for them and for their lucky owners. And it’s really, really wonderful to see old campaigners enjoying themselves —especially since they make those huge four-foot four-railers look like cross-rails. Let’s face it, a great athlete, equine or human, is just a joy to watch.

A recent weekday with Elkridge-Harford saw horses by Dynaformer (sire of twenty-five Grade 1 Stakes winners, including Barbaro), Sadler’s Wells (fourteen-time champion sire in Great Britain and Ireland and sire of over eighty Grade 1 Stakes winners), and Smart Strike (Sire of Curlin and inducted into the Canadian Horse Racing Hall of Fame), sires of horses more apt to be running with each other at Royal Ascot or Dubai than over Maryland farmland.

Orange County and Piedmont count a number of current and former chasers from the yards of Richard Valentine, Neil Morris, and Julie Gomena, including Maryland Hunt Cup winner Michele Marieschi (by Alzao out of Escape Path), who retired to Julie Gomena’s stable to be a hunter for her husband. All of the horses ridden by Piedmont MFH Colvin Ryan, a former leading amateur jump jockey, saw some time at the races.

Greenspring Valley Hounds’ list of actively hunting current and former racehorses is too long to recite here. But here are three Greenspring ex-racehorse stories that I love:

When Maryland Hunt Cup winner Private Attack (by Private Interview out of Ruby Sunset), purchased by the Colhoun family at Charlestown racetrack to be a polo pony (he did play), showed jumping talent in the hunt field, he pulled off one of the most successful mid-life career changes in history.

Ivory Poacher (by Buckfinder out of White Knuckles), another Maryland Hunt Cup winner, formed such a multi-year bond hunting with his owner, Redmond Finney, that in later years as Mr. Finney found it more and more difficult to mount, Ivory would move closer to the mounting block to help him out. Timber star and winner of the Maryland Hunt Cup, Pennsylvania Hunt Cup, and International Gold Cup Buck Jakes (by Turkoman out of Acharmer) hunted well into his twenties as a member of Charlie Fenwick’s family and was often pressed into service by his grandchildren for the costume class at the Green Spring Valley Hunter Trials. 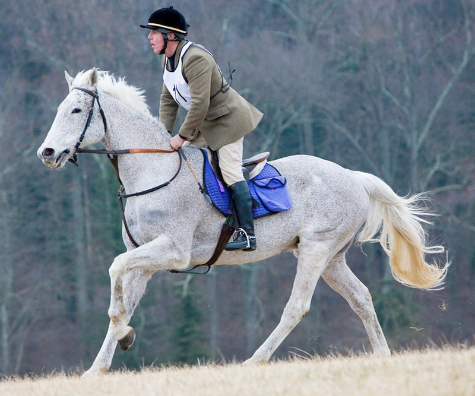 My failed racehorse turned world-class ladies hunter Strike D’Ore aka Shaddy (by Iron out of Power of Attorney) was still going at twenty-four after introducing at least five people to the sport, hunting twenty straight seasons, and sharing fun days in the hunt field with many, many people. Good hunters get passed around like good ponies, and there’s always a job for them in the hilltopping field as they get older and creakier...or take care of older and creakier riders...or teach juniors about the game. So, clip your ex-racehorse, get out your woolies, tie your stock, polish your boots, call up your local MFH, and get ready for some hunt field fun with your real horse. I’ll bet you a hundred dollars that he enjoys it more than you.

Anne Hambleton is a foxhunter and former amateur steeplechase rider. She is the author of Raja: Story of a Racehorse. (Click to read Foxhunting Life’s 2011 Review of that book.) Anne lives in Vermont with her family and animals. This story, from her Blog published on Horse Collaborative, was reproduced with permission.

FHL invites you to use the Comments field below to tell us about your ex-racehorse in the hunting field.

+3 # Mary OConnell 2013-02-02 19:50
The only real foxhunting horse is the Thoroughbred. Especially when you absolutely positively have to be there!!
Reply
+2 # Linda M Epstein 2013-02-02 20:11
My first hunter was a snarky TB mare bought at Frying Pan in the early '90's. She hated ringwork, enjoyed trails and just loved hunting. Whipped off her for most of a decade and felt safe always on her. My husband always said luck and fortune brought that mare and me together to share doing a thing we both loved.
Reply
+3 # Gail Day 2013-02-02 20:14
I'd like to add to this that a never raced thoroughbred mare willingly toted my Parkinsonian father over walls and down and up creek beds with her amazingly strong legs, cat-like in their ability to scale these obstacles, without ever jumping, because, good God, Edgar would've never made it with her. She could out-walk and out-trot anything else in the field, God bless you May, you were a great mare.
Reply
+2 # Bill Baehr 2013-02-02 20:14
It's great to see the hunt people promoting the greatest horse that God ever put on the green earth. Maybe fewer ex-racers will go to slaughter and fewer warm duds will show up to hunt.
Reply
+1 # Cheryl Microutsicos 2013-02-04 08:16
I hunt both a warmblood and a thoroughbred. While they are both great hunt horses, there is nothing like galloping on my thoroughbred! I am hopeful and excited that my new horse, who is also a thoroughbred, will be even half as good as my fabulous TB. (who is 26 now and still hunting strong!)
Reply
+2 # Alison Howard 2013-02-04 10:03
CANTER Mid Atlantic has been a great source of Hunt horses for my barn! Top Punch was donated to CANTER after 10 years of racing and came to my barn to see if he'd Hunt. Like any Two Punch horse, he oozed class and took to Hunting like a duck to water. He was my whip horse until he retired from Hunting in 2012, which led me to the second CANTER horse, No Time For Love, out of Red Tail Hawk-Long Distance Love. As a 4 y.o., he's young and green, but SANE and game. In his first season whipping-in he travels solo, jumps anything in front of him and has learned a whip cracking at his side is not cause for concern.

As others have said - NOTHING like riding a horse who knows how to gallop and work!
Reply
+2 # Bev Strauss 2013-02-15 10:26
We used to watch champion chaser Zaccio out with Essex- what a horse!!!!
Reply
Refresh comments list
RSS feed for comments to this post