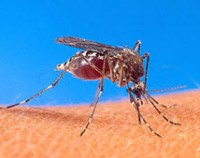 West Nile Virus remains a threat across North America. The last two months have seen an increase in cases reported in both horses and humans.

So far this year, thirty-one states have reported 157 cases of West Nile in horses, with Louisiana and Texas having the most cases.

The virus seems to cause more problems in horses than in humans. Horses suffer severe neurological symptoms often leading to death, while most humans recover well.

In horses as in humans, the virus is contracted from the bite of an infected mosquito. Mosquitos get the virus from infected birds. According to the Center for Disease Control (CDC), there is no documented evidence of person-to-person or animal-to-person transmission of WNV.

However, the CDC does state that mosquitoes become infected when they feed on infected birds or other animals (italics mine). That suggests that an uninfected mosquito could conceivably bite an infected horse and pass the virus on to a human caretaker.

While there is no vaccination or treatment against WNV for humans, there is a vaccine for horses, and so long as mosquitos are still around, it isn’t too late to have horses vaccinated.

The good news is that the number of total cases in horses has fallen dramatically over the last decade, due, according to health experts, to both vaccination and to naturally acquired immunity.