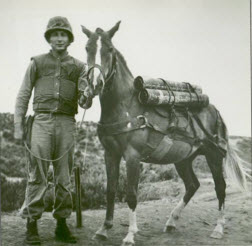 Lt. Eric Pedersen and RecklessMany of us recall the rave reviews that followed the London opening of the blockbuster play—now a movie—War Horse. As everyone drawing breath knows, the fictional story is about a boy who loses his horse—with which he has an uncommon bond—to the battlefields of World War I.

A friend, Herb Jonkers, just pointed me to the story of a real life war horse named Reckless, who was separated from her youthful owner during the Korean War and became one of the Marine Corps’ greatest heroes. In 1997, when Life Magazine published a special Collectors Edition titled “Celebrating Our Heroes,” the story of Reckless was included alongside the stories of other heroes such as George Washington, Thomas Jefferson, Abraham Lincoln, Martin Luther King, and Mother Teresa.

Reckless was foaled by Morning Flame—a favorite of race fans in Seoul, Korea—devotedly trained and ridden by young Kim Huk Moon. Kim grew even more attached to the foal, but when war engulfed the country, the racetrack was abandoned.

Her story has been told in Reckless, Pride of the Marines by Andrew Geer. Robin Hutton, who has written a movie script about Reckless, continues the story on his website:

“Lt. Eric Pedersen paid $250 of his own money to a young Korean boy, Kim Huk Moon, for her. The only reason Kim sold his beloved horse was so he could buy an artificial leg for his older sister, Chung Soon, who lost her leg in a land mine accident.

“Kim’s loss was the Marines’ gain. Reckless joined the Marines to carry ammunition to the front lines for the 75mm Recoilless Rifle Platoon of the 5th Marines, and she quickly earned the love and respect of all of the Marines that served with her.

“It was not only Reckless’ heroics that endeared the Marines to her; it was her incredible antics off of the battlefield. Let’s just say you never wanted to leave your food unattended.

“Reckless had a voracious appetite. She would eat anything and everything, but especially scrambled eggs and pancakes in the morning with her morning cup of coffee. She also loved cake, Hershey bars, candy from the C rations, and Coca Cola—even poker chips, blankets, and hats when she was being ignored, or if she was trying to just prove a point.

“One of Reckless’ finest hours came during the Battle of Outpost Vegas in March of 1953. At the time of this battle it was written that, ‘The savagery of the battle for the so-called Nevada Complex has never been equaled in Marine Corps history. [The battle] was to bring a cannonading and bombing seldom experienced in warfare … twenty-eight tons of bombs and hundreds of the largest shells turned the crest of Vegas into a smoking, death-pocked rubble.’ And Reckless was in the middle of all of it.

“Enemy soldiers could see her as she made her way across the deadly no man’s land rice paddies and up the steep 45-degree mountain trails that led to the firing sites. ‘It’s difficult to describe the elation and the boost in morale that little white-faced mare gave Marines as she outfoxed the enemy bringing vitally needed ammunition up the mountain,’ Sgt. Maj. James E. Bobbitt recalled.

“During this five-day battle, on one day alone she made 51 trips from the Ammunition Supply Point to the firing sites, 95% of the time by herself. She carried 386 rounds of ammunition (over 9,000 pounds—almost five tons!), walked over 35 miles through open rice paddies and up steep mountains with enemy fire coming in at the rate of 500 rounds per minute. And as she so often did, she would carry wounded soldiers down the mountain to safety, unload them, get reloaded with ammo, and off she would go back up to the guns. She also provided a shield for several Marines who were trapped trying to make their way up to the front line. Wounded twice, she didn’t let that stop or slow her down.

“What she did in this battle not only earned her the respect of all that served with her, but it got her promoted to Sergeant. Her heroics defined the word Marine. She was beloved by the Marines. They took care of her better than themselves—throwing their flak jackets over her to protect her when incoming was heavy, risking their own safety.

She was retired to Camp Pendleton in California, where General Randolph McCall Pate, Commandant General of the U.S. Marine Corps, promoted her to Staff Sergeant.

# Marianne Sobchak 2012-07-25 11:49
Our horses will follow us anywhere even into battle. What a wonderful story of courage - Reckless is a true Marine. There is an excellent book, Warrior, The Amazing Story of a Real War Horse by Jack Seely. The story of horses in World War I, the "war to end all wars". I wish it did.
Reply
# Meaghan Meany 2012-07-25 12:01
What a hearwarming story! It just goes to show the inner strength and courage that horses often possess.
Reply
# Cathie Kornacki 2012-07-26 16:22
For those history buffs interested in a comprehensive look at the integral part horses have taken in battle - check out: War Horse: A History of the Military Horse and Rider by Fort Leavenworth Hunt member, LTC (Ret) Louis DiMarco.
Reply
Refresh comments list
RSS feed for comments to this post