Traditional Foxhunting Attire: Is It Relevant? 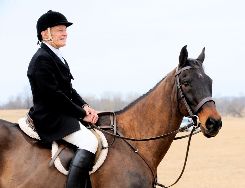 Is the wearing of traditional and proper hunting attire an outdated, outmoded, and irrelevant concept today? If sadly that appears sometimes to be the case, consider this.

Just about every major article of apparel worn by men today throughout the entire western world traces its origin back to the hunting fields of England.

In the 1700s, men’s fashion called for long, wide-skirted embroidered coats, ruffled shirts, tri-corner hats, satin breeches, and silk hose. The epicenter of this fashion was France, but these styles were worn by gentlemen all over the civilized western world, including England and her colonies.

Everywhere, that is, except in the English countryside. There, gentlemen found the long-skirted coats ill suited for hours in the saddle; elaborate embroidery, silk and satin too fragile for the thorns, branches, and weather of the field; and tri-corner hats too easily lost in the heat of the chase. And the mud! How to clean mud from ruffles, embroideries, and delicate fabrics?

So the English country gentlemen shortened the coat skirts; “cut away” the frontal skirts on some coats for comfort in the saddle, thus giving us the formal cutaway and tailcoat; adopted hard-wearing, tightly woven woolen fabrics for warmth, durability, and protection from the weather; and designed protective riding helmets—the top hat and the derby.

This radical departure from society’s accepted fashion, born and worn in the English countryside, eventually came to the streets of London—causing, on occasion, quite a stir! In time, this sporting clothing morphed into the ordinary street wear of the common man.

The genesis of many design details of today’s street clothing harks back to the needs of the hunting man. The cut, tailoring, and buttonhole in our coat collar allowed it to be stood up when needed and buttoned round the neck in cold or wet weather. The slanted side pockets on many of our sport coats gave easier access to the contents while sitting in the saddle. The slits at the bottom of the coat—either the single vent in the back or two side vents—allowed the coat to drape around the saddle rather than riding up on the wearer’s back.

The top hat was designed specifically as a crash helmet for the hunting field. Tall and stiffened by impregnating laminated twill and calico with shellac, the topper provided a degree of shock absorption in the event of a fall. It was often attached to the collar of the coat by a black or scarlet cord in case it became dislodged from the head by a low hanging branch.

The January 16, 1797 issue of the St. James Gazette (London) reported the “catastrophic circumstances attendant upon the top hat’s first appearance” on the streets of London.

"[Mr. John Heatherington] was arraigned before the Lord Mayor on a charge of breach of the peace and inciting a riot...he appeared on the public highway wearing what he called a silk hat—a tall structure having a shiny lustre calculated to frighten timid people....”

According to the Gazette, women fainted at the sight, dogs yelped, children screamed, and one youngster suffered a broken arm. Heatherington was required to give bonds in the amount of Ł500.

In the mid-nineteenth century, one William Coke of Norfolk, annoyed at having his top hat repeatedly knocked from his head while hunting, went to a hatter of the Bowler family to have a new hard hat designed. The lower, rounded crown was stiffened with shellac, and a wide leather band with an adjustable draw cord was provided on the inside to establish a safety space between the top of the head and the crown of the hat. The bowler hat has also been known as the “billycock” for William Coke.

So to return to the question posed at the outset—Is the wearing of proper hunting attire an outdated, outmoded, and irrelevant concept today?—I say, no.

Hunting attire was never a static design style, but evolved continuously. Developments in weaving machinery ushered in the manufacture of improved wool and cotton fabrics; a handful of creative individuals showed up in the hunting field with better ideas; and new technologies in plastics and electronics gave us the means to participate in greater safety.

Before we modify our traditional attire, however, let’s separate legitimate progress from laziness and vanity. If an improvement in materials, fabric, or technology comes along that will make us more comfortable or safer in the saddle, by all means we should adopt it. We already have done so with improved safety helmets and cell phones.

But when laziness prevents us from turning out cleanly and tidily, or when vanity prompts us to distinguish ourselves from the rest of the field with a gaudier-than-thou accouterment, we have lost our way. While devotion to tradition should never provide an excuse for a closed mind, honoring the thread of our history and showing respect for our landowner hosts should be sufficient incentive to turn ourselves out in a uniformly acceptable way.

How do you feel about proper and traditional attire? Use the Comments field below to express your opinions.

+2 # Ginny Howard 2012-06-13 20:16
Other than an approved safety helmet, my attire is strictly traditional and proper. The design and style of proper attire has a purpose. Our hunt gives new members one year to acquire their proper kit. Many very nice items can be bought reasonably at consignment stores or online, so there really is little excuse for not adhering to proper turn-out,other than ignorance.
Reply
+2 # Andy Bozdan 2012-06-13 22:53
Should we? I think we should! I hate the slow but painful death of the correct hunting attire! Not only does it have very practical,justi fiable reasons for it being worn but also it has always been and continues to be a mark of respect to our land owners without whom we would not be able to hunt. Yes any fool can hunt in jeans and tee shirt but are you honestly suggesting that we let standards slip? To hell with that idea! the dress for both cubbing and open hunting is both practical and smart so why change it? Seems like some would haveus change just for changes sake? If it aint broke dont try and mend it!
Reply
+1 # Gretchen Pelham 2012-06-14 11:26
Masters set the standards for their hunt. Way back when I started hunting, Masters insisted on correct turnout. If we are seeing "the slow but painful death of correct hunting attire" as Andy suggests above, I would love to hear from some Masters as to how they feel about it.
Reply
+3 # Karen Wilson 2012-06-14 14:33
As our traditions, civilities and modesties crumble throughout our culture, a beautifully and properly turned out hunt field proves humanity still reigns somewhere.
Reply
+3 # Laura Hunt 2012-06-18 04:49
Love to wear & see proper attire in the hunt field. Where the most changes occur is the hunter show ring. Why are juniors allowed to wear shadbelly coats and even worse, with low rise breeches? Very unattractive!
Reply
# Babette Cade 2012-06-21 14:20
I maintain my interest in riding even though I have not ridden in some time. However, I am and was proud to wear correct attire and eschewed jeans even for schooling. It sets me apart because I am set apart by my choice of interests and hobby. Why would I want to look like every other sloppily dressed bum in the street. Riding is the most beautiful sport we have and the partnership with the horse and surroundings is an environment, not merely a workout. I defer to the past here. Lowering standards, too often a tactic for the ill-informed, to attract "new fans" is despicable.
Reply
# Stephen McElroy 2012-06-21 18:54
I recall my hunt (Pickering, Chester Co., PA) running into a farmer pack. Out of 25 people no two had the same outfit! Tradition is just that . . . stock tie becomes bandage, Frock keeps you dry. Brown tops preserve the style of boots worn in the revolution, the leather being "turned down" during peace, turned up to protect your knees. Colors are earned not givien. There should be no question here.
Reply
# Joy Crompton 2012-08-14 11:40
I'm a stickler about turn out of both rider and horse in the hunt field. As a Master, I do my best to set a good example.
Reply
# Guest 2022-10-02 09:19
Robert Maslinski
My mother, in the 1920s, preferred to wear a bowler hat for hunting but this was considered incorrect without a bun; so she had a hairpiece made into a bun.
Reply
Refresh comments list
RSS feed for comments to this post