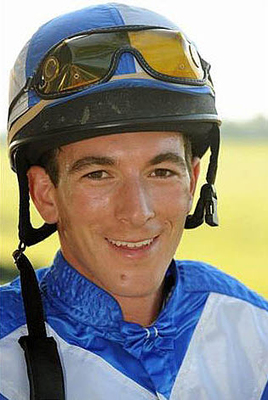 Jake ChalfinYour vote in the HRTV Film Festival at Santa Anita could steer “some serious prize money” to the Jake Chalfin Beneficiary Trust. Jake is a brave young man with a healthy attitude, and I hope you’ll watch his film and vote.

Foxhunting Life first reported on Jake in Norm Fine’s Blog of September 18, 2010 and in a follow-up article a year later. What follows is Jake’s latest adventure, in his own words:

I recently met a wonderful woman, Kristy Cecil, who was in from California visiting her folks who are my neighbors. This chance meeting opened a new chapter in my life. Kristy and I instantly found a connection and the next thing I knew we were making a film.

Kristy, who works in prime time network television, also happens to be a horseman. A day after we met, over a Guinness at the Whip Tavern on one of those special snow days, she learned about a film festival that Santa Anita Park and HRTV were co-hosting. The criteria for the film were simple: a day at the races at Santa Anita; 5 minutes long.

Kristy instantly thought that she would like to make a film about me experiencing a day at the races, while sharing a little of my story. With only a few short weeks to put this whole thing together, she raised the money to cover my travel costs and together we wrote a script. I flew out to California for four days and the weather Gods smiled on us. We had a great time filming with an awesome, all volunteer crew. The entire experience was very special and rewarding, and I met some really fantastic people. I hope this film can warm some hearts.

Please click this link to the HRTV Film Festival and watch our film, “Jake’s Day Racing.” It is one of twenty-plus films, and we need you to vote for it. Every vote counts, and there is some serious prize money at stake! If we are fortunate enough to win, Kristy will donate the winnings to the Jake Chalfin Beneficiary Trust. Please share this with all who you think will enjoy it.

Many thanks,
Jake Chalfin