A Most Memorable Hunt 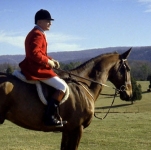 Returning to our Tell-Me-a-Story series, we’ve already covered “How I Came to Foxhunting” and “My First Foxhunt,” and we’ve received some good stories from our readers in return. For the next subject, let’s tackle “A Most Memorable Hunt.” There has to be at least one day, among all the days in all the seasons past, that remains as clear in your memory as the day it happened. There are probably several such days. I’m going to pick one that has remained for me a constant joy to recall. I’ll tell you my story. Please tell us yours.

My memorable hunt doesn’t equate to the best, the fastest, or the most exciting. Many of the most thrilling hunts I’ve experienced remain simply a blur. I recall such days with hounds roaring, hooves pounding, fences disappearing below the girth, and no thought but to keep up. However, there was never time for my mind’s shutter to capture and freeze those images with clarity for a lifetime.

Rather, I recall one slow, bluebird day, when scent was less than ideal, hounds had to work for every inch of the line, and the pace was never brisker than a trot. After twenty-five years at least, the images are still vivid. What made that day so memorable would be a fair question to ask.

It was one of the best hound hunts I ever saw. Perhaps it was the first I ever saw from start to finish! The country was open, and I was witness to every inch of progress. Hounds were clearly on a good line. Their heads were down, and they worked assiduously to follow it. The hound music never reached the spine-tingling stage. It remained tentative and sporadic.

Hounds would carry the line, then lose it. They spread out and cast themselves in circular patterns, covering every possible direction the fox might have taken. One hard-working hound would begin to feather its stern, speak questioningly, and carry the line forward. Other hounds would abandon their quest and come to help. When the lead hound faltered, another would recover the line and carry it on. The lead changed as many times as there were hounds in the field. This was a pack at work, each hound playing its role—hard-wired through hundreds of years of careful breeding—to support the larger effort, the team.

Blue Ridge huntsman Chris Howells knew hounds were doing their best and knew also there was little he could do to help them. I still remember his smile of resignation. He patiently allowed them to sort things out at their own pace.

We walked—sometimes trotted—watching hounds work, find, and lose, time and again, but never give up. I wish I could end the story by telling you that they finally unkennelled their fox and flew for another thirty minutes before putting it to ground, but it didn’t end that way. Temperatures kept rising, and the line just petered out.

The sky was blue, my horse was mellow, and I relished this opportunity to watch hounds hunt, always within sight and earshot. It was a rare day that I never forgot.

Hounds were working a small covert we call the "church pines". First two different coyotes were viewed by our whips leaving the covert (neither was the hunted coyote). A gray fox was also viewed leaving the covert!

As we followed hounds in full cry on the farm road, our huntsman saw a dark shape in the pines alongside her inside the tree line. Hounds ran around in that covert for a good while, working hard to stay on the line.

We went back up the farm road again...and a coyote crossed with hounds in hot pursuit. Right after hounds, out came a dark coyote (presumably the dark figure paralleling us earlier). That was pretty amazing to see. We figure it was trying to lead hounds away from the hunted coyote.

Then around the front of the church we viewed yet another coyote cross the church yard and jump over a big hedge!

Now it's possible that one of these coyotes may have been the same... but they were all viewed pretty close up and descriptions of their color and size varied so we know it was at least 4 different animals. The one jumping the church hedge may have been one of the first coyotes viewed coming back.

I had a friend capping and she thought it was dreadfully boring. "All we did was go up and down this farm road, no jumps or anything" is her description of the day!

But it's one most of us will remember for a good long time. Great hound work and music, and great views. We have never run coyotes in such a small area like that again, and probably never will.
Reply
+1 # Johanna Rasmussen 2011-08-23 09:56
In Sweden we do not do foxhunting for real, but ride for a false fox. I was eleven and my favourite pony took off in the first open field, no chance I could hold on to her. Left in a ditch I have dreamt about ever since to do it for real -and better this time!

Reply
+1 # Cheryl Microutsicos 2011-08-24 16:05
Have you ever visited the states Johanna? If you do you know you would have many places to foxhunt for live game. We would love to have a visitor from Sweden!
Reply
+1 # Johanna Rasmussen 2011-08-25 07:43
Hi Cheryl and thanks for your answer/ idea/ invitation! I have been to the states once, but in no horse business. I never really thought about foxhunting outside of Ireland (where I have been working with racehorses) or England. If you'd care to answer, where do you live for example, and where is foxhunting big/ taking place in the states?
Kindly
Reply
+1 # Cheryl Microutsicos 2011-08-26 08:33
i live in Virginia, where we have a lot of hunts. If you come to the states it's a great place to visit for foxhunting. We can do a foreign exchange hunt program