Tell Me a Story: My First Foxhunt 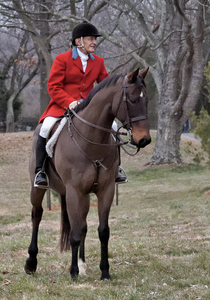 Karen Myers photoIn my last blog, “How I Came to Go Foxhunting,” I told my story, and readers gave us some good stories in return. (See the Comments section after the blog and our Facebook page.) The next logical step in this tell-me-a-story series is “My First Foxhunt.” What do we remember aside from that kaleidoscopic blur of new images and sensations? Once again, I’ll tell you my story, then you can tell us yours.

The things that stick in my mind from my first foxhunt forty-five years ago, surprisingly, have little to do with foxhunting. Hounds? I’m sure there was a pack of foxhounds involved, but they certainly don’t stand out in my mind. As I explained in my last blog, I came to hunting through a love of horses.

Like most first-time foxhunters, I suppose I was primarily concerned with complying with the bewildering rules of hunting etiquette and with keeping me and my horse out of trouble. There are, however, two things I do remember about that day with perfect clarity: (1) romance and (2) the late J. Quincy Adams, MFH.

Romance
I was a young adult at the time and intensely interested in a young woman who was hunting. That was Joan, and I’m afraid that my attentions that day were focused on her to the exclusion of any foxhounds that may have been part of the scene. Within a year we were married, and the foxhunt I’m describing here was the first in several decades worth of foxhunting adventures that subsequently took us through hunting countries in the U.S., Ireland, and England.

J. Quincy Adams, MFH
Quincy was a direct descendant of John Adams—patriot, revolutionary statesman, and second president of the United States (and a descendant as well of John Quincy Adams, the sixth president of the United States). Quincy was in his early sixties at the time of my first hunt, which to me was an advanced stage of old age. He was tall, slender, stood straight as an arrow, but he was old! And yet, to my astonishment, there he was out in front, jumping the jumps.

“Joanie, look at him,” I exclaimed quietly but with awe. “The man is in his sixties, and he can still gallop and jump!”

That was forty-five years ago, and there’s probably some youngster in the field today viewing me in the same way.

Quincy gave me my first lesson in what foxhunting can do for the body and the spirit. And he pulled me in. When, a few years later, I was elected to the Board of Stewards, Quincy talked me into taking over his job as treasurer of the hunt. He also painstakingly inked all our trails onto geodesic survey maps to help me learn the hunting country. He was my first model of a Master and mentor. And I still see that image in my mind’s eye that astonished me so during my first hunt of that old man jumping the jumps!

+2 # Denya Massey 2011-06-25 08:04
Hope there are more stories - these are fun. My first hunt would have been on my super pony Tin Tack, but I was too young to remember the hunt. But I do remember the electric feeling of knowing I was going hunting (make that GOING HUNTING) for the first time. Wherever it was, I was shaking with excitement. Tin Tack must have been good, because I was hooked.... speed, jumping everything, often at speed, no one mentioning position, the "best man wins" feeling.... wow, who wouldn't want to do this!! And now I am in J. Quincy Adams age group, but hopefully not too many members notice!!
Reply
Refresh comments list
RSS feed for comments to this post