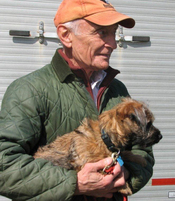 If you liked Rupert Isaacson’s recent New York Times Best-Seller, The Horse Boy: A Father’s Quest to Heal His Son, you will undoubtedly like his book, The Wild Host: The History and Meaning of the Hunt.

Co-published by The Derrydale Press, Wild Host is a beautifully illustrated history of hunting; a meditation on the meaning of hunting spiritually and culturally; and a very personal hunting account. Destined from the outset to be controversial, Isaacson justifies and celebrates hunting while acknowledging the realities of a modern world of heightened compassion and sensitivities. Wild Host is available here in the Bookstore.

Isaacson was born in England and roamed the world as a travel and environmental writer, specializing in Africa. It was there that he came upon a cause that captured him totally—the displacement and removal of the Bushmen of the Kalahari from their traditional hunting grounds by their own government. Isaacson became a vigorous activist for the Bushmen, gave speeches, wrote a book about their plight, and arranged for the Bushmen to appear before the United Nations to plead their case. They won.

At about that time, Isaacson and his wife discovered that their infant son was autistic. Conventional treatment protocols—and they tried many—were unable to improve the boy’s most troubling behavioral problems, and Isaacson immersed himself into finding alternate solutions. He discovered that horseback riding while holding his son in front of him in the saddle was therapeutic for the boy. But only temporarily.

If Isaacson is capable of anything, it’s thinking outside the box. Slowly the plan formed in his mind to take his son on a horseback trek through Mongolia to visit the most powerful shamans he could find to see if they could help. That incredible story is told in his international best-seller, The Horse Boy: A Father’s Quest to Heal His Son.

Isaacson is a master wordsmith who opens his soul to the reader. He will capture, hold, and inspire you. I highly recommend both books. The Horse Boy is available in bookstores and on Amazon.  Wild Host is available here in the FHL Bookstore.