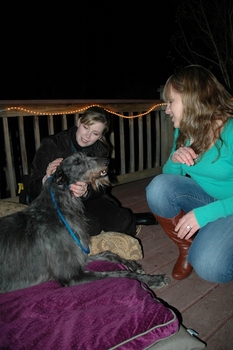 Foxcliffe Hickory Wind greets her admirers with regal dignity.Two news items recently posted on the Home Page touch me somewhat personally—one joyous, one sad: the Scottish deerhound that won Best of Show at Westminster and the destruction by fire of William Frazer’s custom tailor shop in Ireland. What follows in this blog are just sidebars to the stories below. Scroll down to see them.

As every dog person knows, Best of Show at Westminster is huge. Even so, foxhunting veterinarian Scott Dove was completely unprepared for the widespread exuberance, the congratulations, and the excitement of friends and strangers over his Scottish deerhound being anointed with that honor.

Scott is a long-time foxhunter and honorary whipper-in to the Old Dominion Hounds. My wife has been a client of his for her field trial Labrador retrievers. I wanted to meet Hickory and my first opportunity was a party at a local restaurant/pub in Flint Hill, Virginia.

I drove there the other night and found that the restaurant parking lot was not only full, but cars were parked on both sides of the road for quite some distance. The pub was packed, and Hickory was holding court on the terrace just outside. Camera flashes were popping, people (me included) mobbed around her, and through it all she sweetly accepted her due with a weary yet kind expression. Her demeanor was regal and refined.

I had to wonder if there were more people in Flint Hill at that moment than ever before in the history of the town. A joyous occasion.

Years ago, my wife and I made annual hunting trips to Ireland, and each year, during our stay at Scarteen in County Limerick, we would take a day to visit Mr. Frazer in his modest tailor shop in the village of Hospital. He would measure us for a hunt coat, hacking jacket, or vest—whatever we were in need of.

Mr. Frazer’s reputation was such that his clientele included, in addition to the Fines, European royalty and world renowned sporting figures. I have a hacking jacket built for me by William Frazer forty years ago that I still wear. It’s in great condition. Those woolen materials he used were bullet proof!

The scarlet hunt coat he made for me is still sound, although the lining has been replaced three times. The coat is faded and stained with the years, and is now relegated to rainy weather hunting.

Mr. Frazer’s price was right, his fabrics were not to be seen anywhere else, and his workmanship was unsurpassed. Delivery was the only factor in question.

“Can you ship the jacket by the end of January?” I might ask.

“To be sure, but first I must finish this hunt coat for Mrs. Onassis,” he would warn, proudly holding up the half-finished coat with her ticket attached. Although my jacket didn’t quite arrive by the end of January, it was always worth the wait!

William Frazer’s shop was, until this week, an international sporting institution. Now it’s a pile of cinders. William’s son Michael and Michael’s wife Elsie, proprietors since Mr. Frazer’s passing many years ago, plan to rebuild. We wish them the best of luck.

All previously published Blogs are available at Horse and Hound/Norm Fine's Blog.