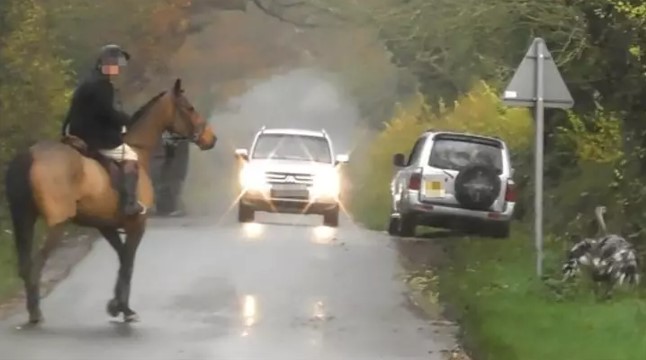 “In what can only be described as a classic case of instant karma, a huntsman was chased up and down a busy road by a huge flightless bird.

“The encounter happened between an escaped rhea and a hunt rider in Warwickshire, in which the man looks nervous and tries to get away from the enormous bird. The rhea appears to have been scared by the hunt and riders in the footage, which was filmed by West Midland Hunt Saboteurs.

“In what looks like a defensive move, it then turns on the rider and chases it up and down the road. The hunt member looks furious about coming face to face with the bird – which is said to have escaped in the village of Avon Dassett, near Banbury.

“In the video, a woman can be heard saying to someone who appears to be riding with the hunt: "This is your responsibility, your hounds were in with those, are you going to do anything about it?

In the UK, foxhunters can’t win for losing.