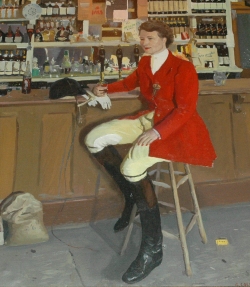 Continuing my theme on the intersection of people and places, FHL subscribers might remember the story that Noel Mullins sent us last month about the Galway Blazers’ Puppy Show. The story was accompanied by a Mullins photograph of the Blazers’ long-serving MFH and huntsman Michael Dempsey. I was thrilled to see the photo, for I have my own memories of Michael Dempsey.

Before Dempsey became Master of the Blazers, he whipped-in to the late Lady Molly Cusack-Smith and the Bermingham and North Galway hounds. In that capacity both he and she are principal characters in one of the stories—a true ghost story that happened forty years ago—in my book, Foxhunting Adventures. So Mullins and I exchanged memories of our mutual connections.

Some fifty-plus years ago, Michael Dempsey was surprised to see an eight-year-old boy hunting the milkman’s pony in the Galway field without a saddle. He knocked on that boy’s door the next day, handed him a saddle and warned, "Don’t come hunting again without it!" The boy was Noel Mullins, and Noel spent the remainder of his youth following Dempsey and the Blazers and riding whatever pony needed to be hunted or schooled.

Mullins also sent me the portrait published here of a youthful Lady Molly Cusack-Smith. The painting, which I remember well, had been painted by a well-known portrait painter of the time, Simon Coleman, RHA, at a popular pub in Athenry. That pub, as I now learned from Mullins, was owned by his uncle Brendan Higgins.

One of my indelible memories of Lady Molly was at that very pub in Athenry. Her portrait hung on the wall behind the bar at the time. It was after a meet; we had all sung our songs; and all eyes turned to Lady Molly. The pub became quiet. She lifted her head, smiled, and in her low, strong, passionate voice sang the songs of Irish freedom for the old-timers. Not an eye was dry when she finished.

As the bartender carefully drew my pint of Guinness that day, how could I have imagined I would be reminiscing forty-two years later with his nephew, sharing unforgettable memories of great mentors and teachers? 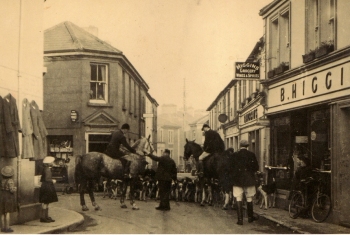 Here is a 1949 photograph sent by Mullins of his uncle Brendan Higgins outside the pub in Athenry, serving a stirrup cup to Major Philip Profumo, MFH (brother of newsmaking British Defense Secretary John Profumo) at the Galway Blazers’ Opening Meet. The shop behind the gray horse—the newsstand—belonged to Mullins’s mother until she married and gave it to her brother. Mullins’s mother and uncle both hunted with the Blazers. His uncle ultimately presented the painting to Lady Molly. Mullins tells me that it now hangs in Bermingham House next to the painting of John Denis.

# Guest 2016-07-25 19:45
I hunted with the North Galway and Bermingham Hounds when Pick carried the horn,then Eddie Crotty.then Henry Gordon,it was my great pleasure to take my first steps in the equestrian world on many memorable rides out of the yard in Bermingham and to get to know Molly.the first hunt I saw Molly was still the huntsman,she inspired me to want to ride,in particular to hounds.she was riding her reliable Wille,the meet was in the lawn at Bermingham House,it was not long after the hounds went into the covert and Molly was blowing them away,from hence forth I was obscessed.Forev er greatful for her encouragement.
Reply
# joanna Hyland 2021-12-06 15:21
i would love to get a copy of your book foxhunting adventures. can you point me in the right direction please. Joanna Hyland, Lady Molly's grand-daughter.
Reply
Refresh comments list
RSS feed for comments to this post