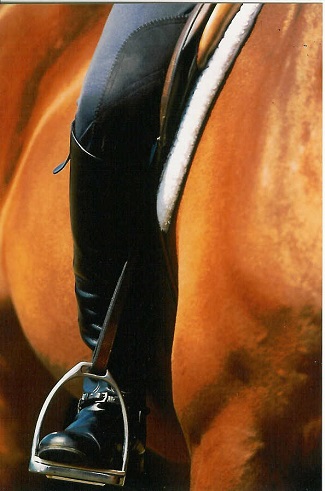 For safety, spur strap buckle is centered on the ankle with the free end of strap pointed to the outside.When you are wearing spurs, where does the buckle of your spur strap fall? As the result of the concerned suggestion of James Wofford, Olympic veteran and articulate three-day coach, Foxhunting Life has changed its recommendation for the proper way to wear spurs. (Hunting Attire, Tack, and Appointments under the Resources drop-down menu on our website).

Wofford writes: “I (and others, George Morris, for one) want the buckle exactly centered on the rider’s ankle, thus the least likely to catch the branch of the stirrup in the event of a fall. For your consideration, I enclose photos of what I refer to as THE Lower Leg Position, meaning, in my opinion, correct in absolutely every aspect.”

Wofford believes that this practice has its origins in the military. That’s the way it was taught to him in his days at Culver Military Academy, their teachings based on the U.S. Cavalry Manual of Horsemanship and Horsemastership by Gordon Wright. Wofford continues: 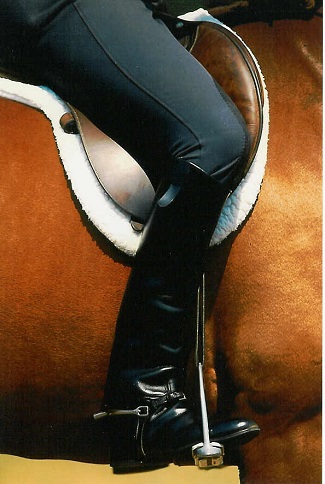 “Like many things in horses, verbal traditions are usually at the base of things. Probably some grizzled General remembered watching a "corporal of no consequence" get his spur hung in the stirrup and figured it out. In a cross country clinic, I once told a talented, but big-mouthed boy not to do something I considered potentially dangerous. ‘Oh, Jim,’ he popped off, ‘that’s a million-to-one shot.’

“I'm the same way about people at a check, normally riding astride, lifting their leg over and sitting side-saddle...that's fine, rests your back or seatbones for a second, but take your other foot out of the stirrup, too! If you sit, for example, right leg over, with your left foot in the stirrup, and your horse spooks left, the best thing that can happen is that you did not forget to WD-40 the safety catch on your stirrup bars...otherwise you WILL get drug. You only have to ever see that once (Ballsbridge, 1960) to remember it forever.

“I finally figured out why [former USET Three-Day Coach] LeGoff was so picky about stuff...because he had already watched a million of them.”

Thank you, Jim. I have always inserted my own stirrup leathers into the spurs with the buckles arranged as far as I can get them to the outside stirrup slots. I couldn’t even tell you why. Just habit. I may never reach a million rides, but “a one in a million shot” doesn’t necessarily mean it won’t happen ’til the millionth! I will adjust my straps.

So, here’s Foxhunting Life’s updated recommendation for the proper wearing of spurs: Buckle should be centered on the ankle for safety, with free end of strap pointing to the outside.