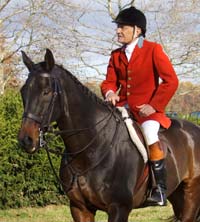 With regular reports from Ireland and England by photojournalist Noel Mullins, Foxhunting Life is pleased to bring you a wider window into the world of foxhunting.

Mullins, having retired as marketing chief for IBM in Ireland, has happily reverted to his true personna—foxhunter. FHL subscribers have already enjoyed his stunning photographs and well-crafted articles. There’s more to come.

Mullins also has two books currently in print and available through FHL’s Bookstore. In The Origins of Irish Horse Fairs & Horse Sales: 3,000 Years of Selling Irish Horses, the author explores the roots that have made Irish horses famous the world over. Irish horse fairs and horse sales have lured buyers from every nation in the expectation of finding horses with good temperament, tough bone, and athletic ability.

Mullins’s book starts with the origins of horses in Ireland and with the earliest—perhaps the first—Irish horse fair on the Hill of Tara around 1200 BC. This remarkably researched volume carries the thread of the Irish horse through the settlements of the early monasteries, the Viking and Norman occupations, up to the present day. Irish horses have carried some of history’s most famous warriors, and thousands of Irish horses were sold to the armies of Europe over the centuries. More than two hundred images enhance the book’s appeal.

American foxhunters will know many of Mullins’s larger-than-life characters. Michael Dempsey, renowned MFH and former huntsman of the Galway Blazers, was whipping-in to Lady Molly Cusack-Smith, MFH and huntsman of the Bermingham and North Galway, when I first knew the two of them. In fact, in my forthcoming book, Foxhunting Adventures: Chasing the Story, I have included a true ghost story that features both of those unforgettable characters. But that, as they say, is another story altogether!
July 18, 2010