Ben Lott on Brian over the sheep wire

Descendants of these and subsequent stallions and mares of Irish draft pedigree can be found among New Zealand’s twenty-eight registered hunts, covering country that ranges from vast, nearly roadless plains to lush meadows to rocky stream beds, steep hills and even surf-kissed beaches. And everywhere those hunters, RID or Irish draft cross, jump the wire sheep fences (with or without droppers) that typify New Zealand hunting and terrify outsiders.

“Jumps anything and everything,” is the phrase most New Zealand riders use about their mounts of Irish blood, closely followed by “takes care of you.”
New Zealand’s deep and diverse agricultural strengths mean that hunts have vast available country. Hunt members are often sheep and cattle farmers or orchard and vineyard owners who hunt often and also compete in dressage, trekking, and show jumping.

Many hunting Kiwis were introduced to the Irish horse by touring stables in Ireland and attending the Royal Dublin Society Horse Show escorted by Thady, who knew not only the Irish horses but everyone associated with them.

Glynne and Lynley Smith, who owned a sheep station in Central Otago at the time, spent three weeks in 1988 with the Ryans touring Ireland and hunting.  As Master of the Central Otago Hunt on South Island, Glynne’s hunting mounts since then have been RID  and Thoroughbred crosses from Kingsway Diamond, Laughton’s Legend, and a later import, Coalman’s Touch (Touch of the Blues x Warrenhouse Blackbird).

“Harley’s character is best summed up as obliging and placid yet has tons of get up and go when asked,” said Glynne. “The Irish blood gives him an affinity with jumping, and all Irish horses possess what I call the extra leg. He is not short on stamina, and was easily taught to sort up tricky distances, i.e jumping through pine plantations of varying striding. If it looks really tricky, I present him in a trot. He is quite happy when in the field to go first or last and has the scope to jump full wire when we get into open unprepared country. In short, a nice uncomplicated ride, and at one time I could ride a pretty tidy dressage test on him as well.”

Another Ryan convert, Lesley Spence of Thornfield Irish Sporthorses near Christchurch, has bred approximately fifty RID horses since 1988. Two purebred RID and six partbred stallions currently stand in New Zealand according to IDHSNZ records.There are 1,070 horses registered in categories according to proportion of Irish draft and an appendix for those with one-eighth Irish blood. Many more breeders don’t bother to register their horses, Spence notes.

“The trend in eventing is to breed warmblood and Irish crosses, and in hunting it is the Irish and Thoroughbred cross,” said Tanner.

“Crossing RID to lighter New Zealand horses adds another dimension,” Spence explained. “Irish and Irish sporthorse foals have great temperament, like a spaniel, whereas a Thoroughbred foal is like a terrier.”

And they take to hunting naturally, say their fans.

“Irish horses think their way out of a problem; they can see it and look after you,” Tanner explained. “They stay sound, because over years of breeding in Ireland the farmers could usually afford only one horse, and it went from plowing to Pony Club to a full day’s hunting. They don’t waste energy, and they genuinely love cross country and jumping.”

The growing practice worldwide of “putting blood over bone” to create sporthorses threatens the numbers of pure RID. And both women emphasize that a supply of purebred Irish mares is key to sustaining this breed, which has "endangered maintained" status by the Food and Agriculture Committee of the United Nations and is listed in the "Watch" category on the American Livestock Breed Conservancy's Rare Breed Conservation Priority List.

Bevan and Jo Souness, Christchurch Hunt members, took a “Thady tour”to Ireland with Spence and have been occasional breeders and consistent riders of Irish horses. Jo’s mount is Millhouse, a three-quarter son of Coalman’s Touch out of  Peaceful, a half Irish daughter of Laughton’s Legend.

“In early days in New Zealand, most hunters were Clyde/Thoroughbred crosses,” Jo explained.

“The Irish have got awesome jumping technique, so they are safe over their fences,” said Jo. “They might seem quiet and dodo to ride, but on a hunt field they come alive. The height of them doesn’t matter, they often ride big. They are a heavy horse, but they love to jump.”

Millhouse prefers to hunt up front, and he can gallop all day, she said. The pair did five hunts in a row at one centenary.

“Millhouse is the classic sort of horse you see in Ireland: short pasterns, ten inch bone, versatile, not a great mover,” said Jo, “but he has a lovely front topline. He is beautiful to ride over a fence. It is like sitting in a big softie.”

David remembers the virtues of one in particular, a gelding by Laughton’s Legend out of a Thoroughbred mare.

“I hunted him for two seasons; he could jump!” said McConchie.  “One property had a water race and wire fences and rock; he could do it then go back and do the whole thing again. Like in Thady’s videos of the Irish banks, you’d just hang onto a bit of mane.”

The landscape as well as access to stallions determines the right breeds for a hunt field.

“The North Island is hilly and hard hunting, but a good Irish hunter would do it,” Jo insists. “Lesley has sold them to North Island people for hunting, and they come back for more.”

At the far northern tip of the temperate-tropical North Island country, where Kim Rhind is a member of the Northland Hunt, Irish Draughts are rarely seen.

“I don’t think we have a single one hunting with us,” said Rhind.  “There are really no ‘hunting’ breeds here. Our hunters tend to be mongrel-bred horses, Maori horses of no particular breed. Warmbloods are even less common on our hunt field. They are seen more as competition horses only.”

Nikki McHugh, Master of the Poverty Bay Hunt on the east coast in middle North Island is not keen on Irish blood. It’s a matter of wind, she explains.

“We hunt steep, isolated country, and on those hills, you want to be able to jump the next five fences when you reach the top,” she said. “We prefer Thoroughbreds, or station-bred mixed with Clydes. Irish drafts don’t have the puff. Thoroughbreds run on aviation gas, but the drafts run out of petrol on the hills.”

Bruce Goldstone is Master of the Mahia Hunt, Hawke’s Bay, North Island where he and his wife Lea farm cattle, sheep and horses and keep the Mahia pack of fifteen couple. For the past thirty-five years Bruce has bred horses and  hounds to hunt hare over their country of rolling to steep grassland and hills. Recently, six of their seven hunt horses in work carried significant Irish blood.

“Three-quarter Thoroughbred and one-quarter Irish can have too much pull,” Bruce explained. “So two of ours are quarter-bred and four are first cross.”

The couple experiment with crossing Irish with New Zealand horses, and try to avoid “common and carty” results, he said. “I like big, typey Thoroughbred mares for the crosses and good quality stallions. With AI (artificial insemination) the world is your oyster. I’d AI three or four mares, then use the two-year-old colts at stud, then geld them, and jump them.” 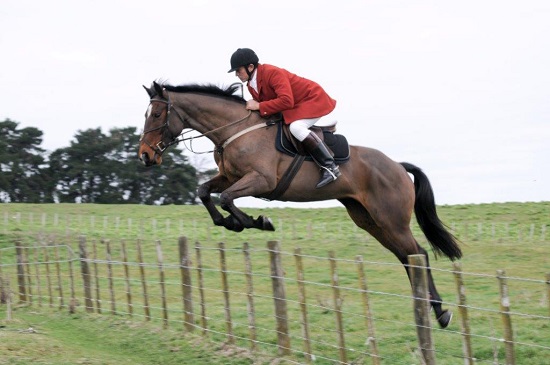 Bruce on Jane over the wire

Not all their Irish horses are in the hunt field: the Goldstones bred Right Royal (King of Diamonds x Purple Return), a showjumper with nine world cup victories, is now owned and ridden by Simon Wilson.

“Lots of Irish and German horses are turning up here in New Zealand now,” said Bruce. He notices difference in general temperament as well as ability. “Irish horses hang their heads over the pasture fence and say hello to you while the German horses are hiding and unsocial.”

“Little was known about this breed when it came here in the late 80s, but the wider equestrian community who were breeding a lot of Clydesdale crosses were impressed with the temperament, smooth paces, and jumping ability,” said Gavin Crossan. “Mares were sent to these two stallions from around the country, and a new generation of hunters were bred. The influence is still very evident on the hunt field today.”

“Hunting people recognized the hardiness, the sure footedness over any type of going, and the soundness that came with the lovely flat bone of the Irish horse,” he said. “The Irish horse excels in its ability to gallop smoothly and at speed, so has become a popular choice for the huntsman and staff at the front of the field.”

Tracy notes their RID and crosses are increasingly appreciated for their versatility.

“As people’s lives become busier, they are looking for an all ‘round horse that can allow them to do a bit of everything—hunting on Saturday and a dressage tournament on Sunday. The Irish Draught is the perfect partner for the average rider. This coupled with their great constitution and ease to keep, lend themselves well to our  lifestyle.”

So what is the legacy of the Ryans and of other early breeders in this horse-loving country below the equator?

The good qualities of Irish horses are seen everywhere from eventing to showjumping. They may not all descend from the original imported RID horses, but those who hunt them cherish  their willingness, ability, and attitude for New Zealand’s vast and varying opportunities for hunting.

“We jump hedges, gorse, wire, hot wire, white tape gates, and if they ping something, it doesn’t matter,” said Jo Souness.  “If you just think it, they go. The more I look at horses, the more I think it’s definitely Irish for the hunt.” 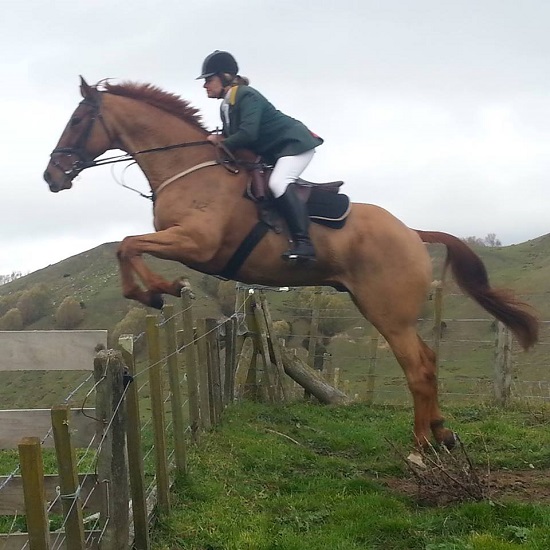 Lea Goldstone on Gregory by Cruiser (who was by Kingsway Diamond) out of a Thoroughbred mare.