The New Masters Seminar, organized by the MFHA and held in Chantilly, Virginia on April 8, 2006 was designed to provide guidance for new Masters. In testimony to the strength of the panel, however, the Seminar attracted over forty Masters, many of whom could hardly be considered ‘new.’ While five of the Masters who attended had less than ten years hunting experience, seven had been hunting for more than forty years, and fully half of the group had more than twenty years hunting experience each.

Managing the Breeding Program
The first issue discussed stressed the importance of a Master being involved in the hunt’s breeding program and not leaving that most critical responsibility solely in the hands of professional staff. Jimmy Young pointed out that the Master and his or her successors have the constancy with the hunt and the relationship with the MFHA, while a huntsman may leave at any time. 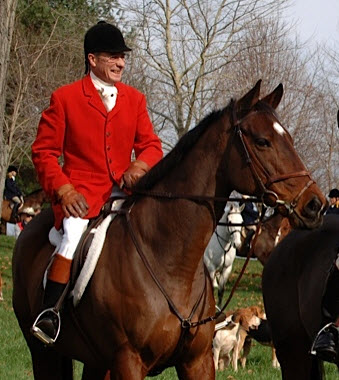 Jimmy Young, MFH / Douglas Lees photoHowever, said Marty Wood, “You, as Masters, must be committed to long terms in office before mucking about with the breeding. It takes seven to ten years to make a pack and a lot less than that to ruin it.” The consensus was to rely on one’s professional huntsman to help, and to cooperate with him, but a Master must take primary responsibility.

Panel members agreed that, despite the wonderful new computerized tools for generating hound pedigrees, all Masters in charge of hound breeding should take the time to hand-write the pedigrees of all their hounds. That is the best way to learn and remember the bloodlines. Duck Martin emphasized the point by displaying the Green Spring Valley Studbook, which has been hand-written since the nineteenth century. Wood keeps a separate sheet on every hound he has ever had, with that hound’s hand-written pedigree and notes on attributes and problems. He finds the notes invaluable when considering matings, because he can look back on the strengths and weaknesses of so many of the prospective ancestors. C. Martin Wood, MFHJack McDonald and others urged Masters to breed for what works best in their country—not necessarily what works for someone else, somewhere else. Tony Leahy gave a good example of the soundness of this advice.

“I can’t always keep up with hounds in my country,” said Leahy. “I need a pack to stay together and hunt on their own. That’s what I try to field, and I do it through breeding, conditioning, and a clean comfortable kennel.” 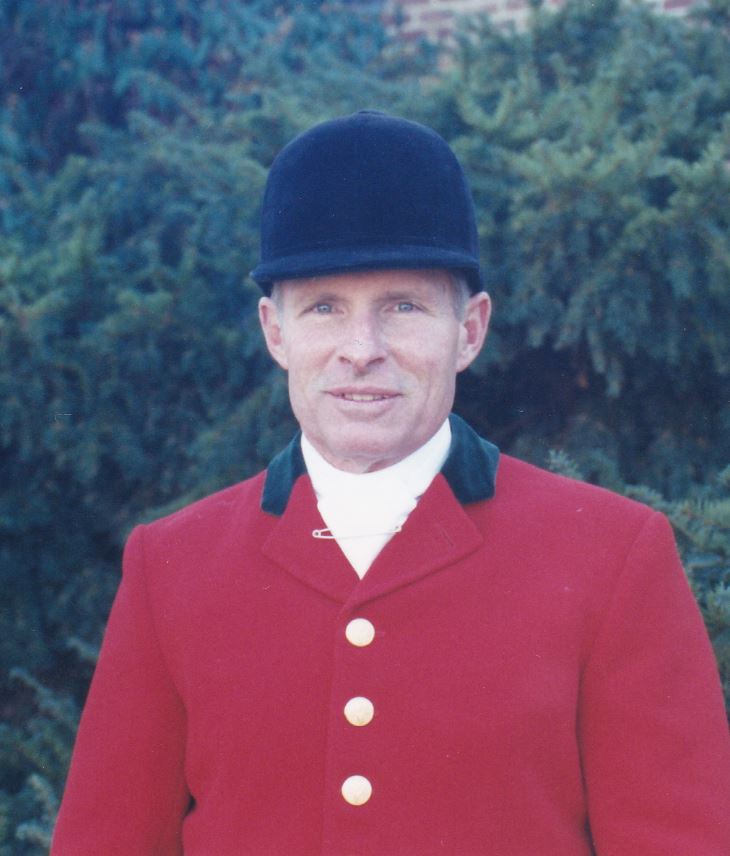 Duck Martin, MFHAs a final note, Young recommended having a clear understanding at the outset that all hounds are the property of the hunt and that no hounds may be drafted in or out of the pack without the Master’s permission. Executive Director Dennis Foster raised the related problem that occurs when a huntsman or Master leaves and wants to take hounds with him. Again, all agreed that the hunt’s policy should be stated and agreed to up front at the time the huntsman is hired or the Master is appointed.

Managing Professional Staff
Dr. McDonald discussed the importance of respect between Master and staff. When mutual respect breaks down, he said, it simply won’t work, and it’s time to make a change—the quicker, the better. Dr. Jack McDonald, MFH / Norman Fine photoWith respect to the hunt’s obligations to their huntsman, the London Hunt (ON) provides, in addition to salary: hunt livery, horses, a house (rent free), and the hunt truck. McDonald said that the hunt also provides insurance coverage, something all hunts should do.

On the subject of landowner relations, while some hunts allow the huntsman to be the principal day-to-day contact, Wood said, and others on the panel agreed, that organization of the hunt country, which includes landowner relations, is an essential responsibility of the Master.

Private, Subscription, or Membership Packs
No member of the panel represented a purely private hunt, which today is very rare. Ben Hardaway’s Midland Fox Hounds (GA) and Marty and Daphne Wood’s Live Oak Hounds (FL) are examples of subscription packs in which hounds and kennels are owned by the Masters, but subscriptions are accepted from those who wish to hunt. In this type of hunt, subscriptions are often minimal, and subscribers have little or no input into hunt management.

In a membership hunt like Green Spring Valley, the hunt corporation owns the pack and the real estate, and Masters are elected annually by a hunt committee, the members of which rotate for fixed overlapping terms. Each Master has a different and defined responsibility. Such a hunt operates in accordance with bylaws established by the hunt committee.

Land Conservation
Jimmy Young, who was responsible for inaugurating the annual Hunting Habitat Conservation Award during his term as Association president, described his hunt’s approach in preserving open space in terms of layers of protection: (1) hunting easements, (2) conservation easements, and (3) the Orange County Land Trust.

First, members and hunt supporters are urged to place hunting easements on their properties guaranteeing hunt access. The areas of hunt access may be restricted, but at least the hunt will be able to continue to cross the land should it be sold.

Second, the hunt has a well-established program of encouraging members and supporters to place conservation easements on their properties to protect the open space in perpetuity.

Third, the Orange County Land Trust was established, separate from the hunt, to collect funds which are used to purchase properties in the hunt country that come onto the market. The Trust then places a conservation easement on the property and resells it, generally with restrictions on where buildings may be erected.

Breeding Hounds for Coyote or Fox
When coyotes began to infiltrate the Midland country, Ben Hardaway treated them like deer—riot. He stopped his hounds from running them. During this period, he noted that some of his hounds were harder to break off coyote than others.

Ben Hardaway, MFH / Elizabeth Sutton photoEventually the day came when he had only coyote to run, so he let his hounds go. He discovered that those hounds that had been hard to stop on coyote ran them more readily than others in the pack. Hardaway reasoned that certain hounds seemed to have more of a penchant for running dog-like quarry than others. So he started breeding coyote hounds. Surprisingly, it wasn’t necessarily a faster or a meaner or a longer-legged hound that was needed, but rather a tougher hound with more stamina and endurance.

In the final analysis, every Master must define for himself or herself what constitutes good sport. While Hardaway wants his hounds to produce a short, sharp, decisive hunt and account for the quarry with style, others want their hounds to produce long, sustained runs for the enjoyment of their field.

A question from the audience asking how often hounds may be hunted produced a range of answers from the panel. Marty Wood divides his kennel into two packs and hunts them alternately so that each hound hunts twice in a seven-day period. Tony Leahy, who keeps only twenty-seven couples in kennel and hunted 116 days this season, hunts each hound two to three days a week. It is important to note that, through proper conditioning and good care, the hounds in each of these celebrated packs are thriving.

Sportsmanship
The MFHA published its booklet, Code of Hunting Practices, in 2000. All Masters should be familiar with its contents. Good sportsmen have always conducted themselves honorably, but it is even more vital to be scrupulous about our hunting today because of increased scrutiny.

“We must consider two things,” said Dr. McDonald, “legality and public opinion. If you break the law, you don’t have a leg to stand on. Don’t break the law.”

Tradition
The panel was divided on this subject, mainly with respect to attire. The first thing to understand is that the Master of a hunt has complete authority to determine the livery of his or her hunt and the degree to which adherence to traditional practices are observed. There are conflicting issues here—primarily having to do with the perception of elitism versus respect for age-old custom.

Jimmy Young’s position is that Masters are the “Keepers of the Flame,” and since most field members are new to the sport, someone has to maintain the Faith. If not the Master, who? Young also pointed out that proper turnout is a source of pride to landowners and farmers, that tradition and manners go hand in hand, and that it is disrespectful to landowners to present anything less than a traditional picture.

On the other side of the issue, Ben Hardaway and Tony Leahy argued that foxhunters will be more acceptable to North American farmers and landowners wearing less formal attire. Hardaway pointed out that the British, in their red coats, have lost foxhunting. Other panel members took the position that it wasn’t the scarlet coats that lost foxhunting in England, but rather the intense class resentment for past injuries, of which the scarlet coat was just a symbol.

Dr. McDonald said that his London Hunt has been hunting in their territory for 120 years and that his landowners enjoy seeing the scarlet coats. Dr. Marvin Beeman, sitting in the audience as the first vice president of the MFHA, argued forcibly that we should maintain our traditions. He pointed out that where he comes from (Colorado) most horsemen are cowboys, yet he has won their respect by sticking to his guns. Mitch Jacobs, MFH of the West Hills Hunt (CA), also speaking from the audience, said that his hunt allows guests to come out wearing anything they like. He wants to hook them first. After they join, they ultimately gravitate to the traditional attire, which his hunt encourages.

In Conclusion
Moderator Leahy had opened the seminar by saying that all Masters have four main issues or responsibilities: to protect the future of the sport, to protect the country, to manage staff properly, and to improve the foxhound.

Those topics were well covered in this seminar and were amplified by strong audience participation. Attendees agreed that the session was as interesting as it was instructional, and Tony Leahy was congratulated for providing this session for new Masters which Mason Lampton and he inaugurated to complement the MFHA’s new hunt staff apprentice training program.

A similar article by Norman Fine was originally published in Covertside, July, 2006.