A few years after the exhibition, in my capacity as editor of The Derrydale Press Foxhunters’ Library, I received a call from a man who introduced himself as Richard Rust. He was a West Point graduate, a retired Army colonel, and a foxhunter. He had films, photos, newspaper clippings, and vivid memories of his late mother, Jane Pohl. He suggested that we meet so he could show me the material stored in his mother’s attic in Leesburg and discuss his plan to write her story.

Jane’s was a story of choices, both good and bad, that she made throughout her life; of her determination and grit to accomplish what she set out to do; of making do with what she had and not being defeated by all she didn’t have; of surmounting unforseen obstacles; and of the love between a single mother, her horse, and her son. I loved the story.

In 1941 Jane was a buck-toothed, teenage, horse crazy Army brat at the Schofield Barracks in Hawaii who saw potential in an unpredictable and dangerous Thoroughbred that was about to be destroyed. Despite dire warnings delivered to Jane’s father by the stable sergeant, Jane persuaded her father to buy the horse. Years of Jane’s sensitive and patient re-schooling followed, along with the inevitable accidents and setbacks.

When Jane and Fitzrada finally emerged as a team and broke into the upper echelons of American postwar showjumping—until then virtually the exclusive domain of men—she received a cold welcome from some. But the astonishing success of this female owner-trainer of modest means with her backyard horse in this male-dominated arena of professional riders and wealthy owners, helped to break down the barriers that prevented women riders of the time from competing in the Olympics side-by-side with men. 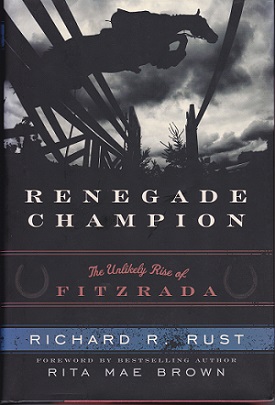 Renegade Champion: The Unlikely Rise of Fitzrada by Richard Rust, The Derrydale Press, 2008, 299 pages, Hardcover $24.95, Softcover $16.95Richard and I became friends, and we met periodically for lunch to discuss his progress with the manuscript. Renegade Champion: The Unlikely Rise of Fitzrada was published by Derrydale in 2008, and it proved to be one of Derrydale’s best-sellers. Last year it was re-issued in a softcover version, and I have added the title to our Shop to make it available to our readers.

In his Introduction to the book, four-time Olympic medal winner William Steinkraus wrote, “[Jane] was a sound rider whose style showed a marked Fort Riley influence. Fitzrada was a tough little horse who also had an army look about him, even aside from his cavalry neck brand, and showed enough wear and tear that you knew his life had not always been easy. However, he was very limber and athletic and could really jump. Jane had a lot of faith in him and, even better, had trained him to a point where she could ride him through the eye of a needle.”

Reply
# Donna Rogers 2015-04-16 10:01
Jane was a keen foxhunter and member of Loudoun Hunt. After she retired from foxhunting she still rode almost daily and boarded her horse at Overbrook near Hamilton, VA. and was owned at the time by Loudoun Hunt Joint Master Anita Graf White.

Overbrook is now the home of Loudoun Fairfax Hunt.
Reply
Refresh comments list
RSS feed for comments to this post