The Red Rock Hounds and Their Country 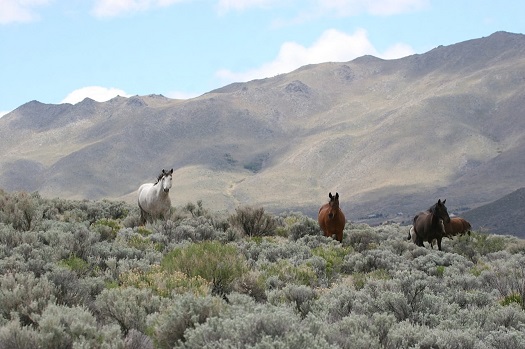 I want to tell you about Lynn Lloyd’s Red Rock Hounds and the country they hunt as a short introduction to our feature story, "How Old Hounds Pay Their Keep at Red Rock." In that story you’ll read how Lynn ingeniously transformed her elderly hounds from a burden to an asset! The old hounds pay their way by increasing membership and caps, and they throw off side benefits by helping to train young hounds and staff. And I have to believe that many hunts could do something similar to their own benefit.

The Red Rock foxhounds hunt the coyote over the high desert of Nevada, near Reno, where cowboys in dusty western hats, vests, and chaps lope after hounds in their Western saddles stirrup-to-stirrup with properly attired foxhunters posting to the trot in their English saddles. 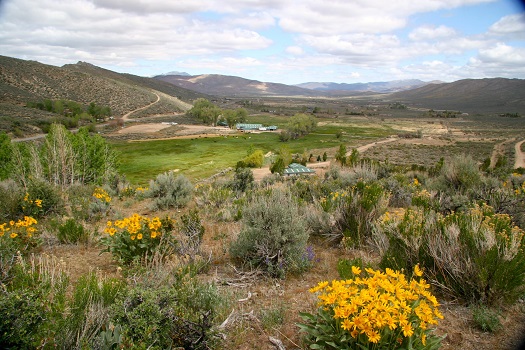 Riding over the country one readily appreciates what those old Western movies were really about. Water and dust. In the great American Southwest, water is king. Whoever controls the water controls his own future and the fortunes of all the others that depend on his water. That’s what all those Western movie range wars were about. Remember?

Lloyd, whose Red Rock pack is based on Treeing Walker bloodlines, tries to breed tricolor hounds for visibility in all kinds of terrain and weather, especially snow. Foxhunters at Red Rock wait for and welcome the snow that furnishes the blessed moisture.

One also appreciates how easily the Indians spotted the western-bound settlers crossing the country. Dust. Clouds of it. Churned up by anything that moves. Including a pack of foxhounds racing after a coyote. Or bobcat. Or mountain lion.

The Red Rock foxhounds would also love to run the jackrabbits with the impossibly huge ears that jump up out of the sagebrush right under their noses. Master and huntsman Lynn Lloyd likes to see the jackrabbits, because there is often a coyote close by, but she doesn’t consider jackrabbits worthy of her hounds’ attention, and she stops them.

The country is enormous. Standing on the top of a rock-strewn hill while Lynn calls in hounds, you look down upon birds soaring over the valley below. The immediate field of view across the stretch of valley to the mountains opposite, rising three thousand feet above the valley floor, all appear within reach. However, you are looking all at once over perhaps thirty thousand acres of nothing but sagebrush, greasewood bushes, and, in places, a few stunted junipers. Across this entire expanse, you may not see the movement of a single living creature.

The United States government owns eighty-seven percent of the entire landmass of Nevada, and the Bureau of Land Management (BLM) administers more than three quarters of the government’s land.

+1 # Barb Peterson 2014-09-09 09:46
I had the pleasure of joining the Red Rock hound in Montana for a joint meet. Lynn was a master in the hunt country of sage brush and deep valleys. Her hounds knew their job and loved their Master. A very different fixture from the PA and NJ hunts I ride with. We had 45 minute gallops and 1/2 mile views. Some days the hunt lasted 5 hours. It was a life time experience. The Red Rock membership were the most friendly and welcoming club around. I had a blast.
Reply
+1 # Karin Winegar 2014-09-09 11:44
I hunted with Lynn years ago--it was phenomenal: vast space, western beauty, speed uphill and own through brush, and she stayed out well beyond my capacity!
Reply
Refresh comments list
RSS feed for comments to this post