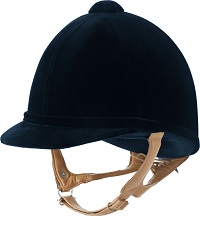 H2000 / Courtesy Charles OwenCan a foxhunter make use of modern materials and technology for a safer riding experience, yet maintain the traditional look of the hunting field? This has been an ongoing challenge.

With foxhunters representing but a small subset of the total market for riding helmets, it makes good business sense for helmet manufacturers to strive to distinguish and brand their product offerings with stylish new shapes, medallions, stripes, and other decorative touches, none of which resembles anything that would have been acceptable in the hunting fields of even twenty years ago.

Correct hunting attire of the early twentieth century called for men and women field members to wear hunting derbies, with men switching to top hats when in formal attire. Later in the twentieth century, both men and women field members were moving toward the wearing of the iconic hunt cap in the field, traditionally correct only for Masters and staff. The rationale was that hunt caps, covering more of the head, were believed to be safer than derbies and top hats. In the interest of safety, most Masters put up little resistance to this migration.

We recently published a story about Caroline Treviranus, whose accident during the 1978 Three-Day World Championships rapidly spurred equestrian organizations to mandate the wearing of approved safety helmets during competition. So it was that when Caroline started managing my hunting stable some years later, I was still wearing the traditional hunt cap in the field.

Constructed of laminated fabric stiffened with shellac and glue, with no chin strap to keep it on my head in the event of an unscheduled dismount, it provided scant protection compared to the new approved helmets. Caroline, in the interest of job security (and perhaps even my health), commenced nagging me about wearing a safety helmet with harness to go hunting.

I kept brushing her off and putting my old custom-made hunt cap back on. She finally tired of making fruitless entreaties and, on opening day of one cubhunting season, she presented me with a box marked Charles Owen.

I’ve worn a safety helmet ever since. To my eyes, the Charles Owen Hampton model has best translated the look of the traditional hunt cap into safe head wear, but this year the company is introducing a new model, the H2000, to the U.S. market that should have special appeal to foxhunters.

A favorite in Britain, the H2000 is covered in plain velvet and features a graceful crown profile more reminiscent of the custom-made traditional hunt cap. It will be available in tack shops this fall, stocked in black, but available as well in navy (for lady Masters or specific hunt liveries) and brown (for men or women during the informal season).

I commend Charles Owen and  every other helmet manufacturer that offer foxhunters protective caps that still hew to the traditional look of the hunting field—caps that provide all the safety of the newer materials, but maintain the appearance and the traditional plain velvet coverings that have come to “brand” us as foxhunters.

# Denya Massey 2014-06-27 13:02
Having grown up with either the decorative hunt cap or no cap at all schooling and hacking, transitioning to a safety helmet was made much easier by the comfort and reassurance of the new helmets. I have 3 now for every day, every ride: summer and winter ones for "at home" and the Hampton for showing and hunting. "Mind your Melon" campaign is full on with the eventing world - as it should be in the hunting world.
http://eventingnation.com/home/the-mindyourmelon-revolution/
(PS the website's mascot is Cinch, the chinchilla, who is some of the photos... don't ask!!)
Reply
# Peter Cook 2014-07-01 13:02
For twenty five years I wore a traditional top hat when dressed in formal hunting red. As I became the odd man out as regards headwear even in the conservative English hunt field, I sought the help of S. Patey (London) Ltd, riding hat manufacturers to Her Majesty the Queen and makers of my top hat. Responding to safety concerns, they had developed a hat that was "two in one" - a traditional hunting top hat, inside of which was one of their protective caps. From the front and side it is indistinguishab le from a regular top hat, but at the back the protective cap comes several inches below the rim of the outer, top hat. The look is fine, but because it is literally one hat built on top of another, it is very heavy and tends to lead to headaches. Peter Cook.
Reply
# Cheryl Microutsicos 2014-07-03 14:33
I love the brown one! Must have!!

Reply
# Robin Williams 2014-07-03 21:32
Where does one get a custom made hat? Please tell me! I cannot find a hat that fits and I've tried on everything in five tack shops. I have two Charles Owens hats that give me a headache after an hour. I finally chiseled out some of the liner on the sides and that helped, but obviously that is not ideal.
Reply
# Gretchen Pelham 2014-07-04 09:51
My experience has been the reverse! The only hats that have given me headaches have been the custom-made! Although the maker can usually fix that.

The best-known maker of custom hunting head wear is Patey in London. I don't know of any in the States.

Re your Charles Owen; it sounds like you need a larger size with more padding added front and back. I would contact the company and see what they can do for you.
Reply
# Mary Millhiser 2014-07-12 15:45
I've used Charles Owen helmets for years. But I saw an ad in Cvertside a while back for the George Morris Pegasus helmet. It looked more traditional. I called, gave the person my size & he wanted to know if my head was round or oval. When I said, I had no idea, he had me send him pix of my head from the side &? the front. My hat fits beautifully. Hi Robin, you might want to try Pegasus. http://www.pegasushelmets.com/
Reply
Refresh comments list
RSS feed for comments to this post