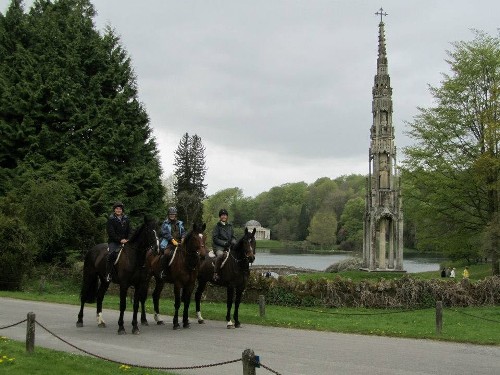 The inspiration for this trip happened quite by accident. While traveling with cousins in the southwestern part of England in May of 2012 , we happened to stop for a Sunday roast at the pub in the tiny hamlet of Highclere Castle, the home of the wonderful television series, Downton Abbey.

We had missed, by a day, a trail ride on the grounds of the castle. My cousin Marti and I have taken many riding trips and are always looking for a new adventure. We began to dream of a trip in England where we would ride in some of the places that we had read about all of our lives in English novels but had never seen. As we visited the Exmoor and the Dartmoor, the haunts of wild ponies and the characters of Daphne du Maurier, we became more excited. We did not, however, have any idea how to accomplish our vision.

The foxhunting season began, and Marti made her annual pilgrimage with her two field hunters from Louisiana to my Virginia home for a week of hunting with the Blue Ridge. While out on one of our beautiful October days, we began talking to a lovely English girl, Megan Corp, a friend of our Master Anne McIntosh. Megan was here riding for Anne, and she began to tell us about her new business venture, Blackthorn and Brook.

It was to be a company that arranged foxhunting trips in England for people who wanted to hunt the beautiful English countryside. Aha! There it was—a solution to our dreams. As I told Megan of our idea for a riding trip for the spring or summer, she jumped in with all sorts of grand ideas and we agreed to keep talking. Megan went back to the UK and told her business partner, Ben Darlington about our idea, and Blackthorn and Brook began planning their first non-hunting riding holiday. We simply told them of our dreams and ideas, and they arranged the most wonderful trip that you can imagine. We settled on ten days in May, bought airline tickets, and they took care of everything else. And I mean—everything.

They met us at London Heathrow with champagne and big plans. We were squired in style to the charming Somerset village of Corton Denham, lodged between lush green hills, to a small inn/pub built many years ago of the beautiful signature yellow stone of that county. Our rooms were lovely, the food was local and delicious, and the innkeepers and staff were focused on our every need. By the end of our stay we felt like family.

The Queens Arms was the center of daily family and social life for that small village. ( I *love* that dogs go everywhere!) The first day was Badminton where we got to watch the two Grand Slam contenders fend off Michael Jung only to be bested by Jock Paget. So exciting.

Our first riding day was a gloriously warm, sunny day which we spent puttering around Dorset on gorgeous Blackthorn and Brook hunting horses. Our first stop was late morning for tea and scones. Then more ambling through villages, farms and lanes to be met in the late afternoon next to a stream by Ben with a full English tea, complete with Scotch eggs (the best ever) made by Megan's mom. 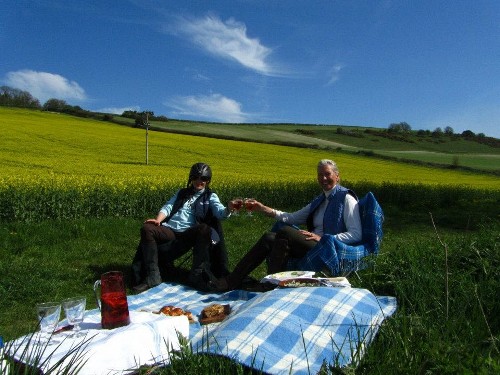 Next was the North Devon coast with a darling red-headed girl who led us on a merry chase around the hills overlooking the sea and Wales. We ended that day with lunch on the beach and much galloping through the surf and sand. Another glorious day.

The next two days and one night were spent in the New Forest. Started in 1079 as a hunting preserve for William the Conqueror and not much changed, according to one of the Masters of the New Forest Hunt, our guide on the second day. Ponies, ponies everywhere. We felt like we had stepped back in time. There were tales of haunted woods, sites of old churches now gone four hundred years, eight-hundred-year-old oak trees. And lots of galloping.

A lovely inn punctuated our two days in the New Forest surrounded by the wild  ponies and next to the gardens that supplied our dinner. Then back to our main digs and a day-long prowl around Stourhead Estate, or, to you PBS and Jane Austen lovers, Pemberly, home of Mr. Darcy. Lunch was in the restaurant there, and the afternoon was spent up on the top of some massive hills overlooking Dorset, Somerset, and Wiltshire. Wow!

Our last, but not least, day began at our pub. And this was our only rainy day. Armed with raincoats and hat covers we covered the Blackmore Vale hunting country and got a feel for what hunting their hedge-lined countryside would be like—in a word—exhilarating! Another adventure for another day.

At day’s end we were met by Ben and the lorry with a full English cream tea: scones made by Meg's mum, clotted cream, homemade strawberry jam, and, of course, champagne. A soft English rain fell as we finished our meal and came to the end of what had turned out to truly be a trip of a lifetime.

Megan Corp has been an established figure in the South-West hunting scene since her Thelwell years. She has her hunt buttons from the Blackmore and Sparkford Vale and is an accomplished horsewoman. She rode for Trinity College, Dublin during her university years, has hunted on both sides of the Atlantic, galloped for a racing yard, and worked as head girl for the French show jumper Pierre-Marie Dubois. She has a claim to fame as equestrian stunt double to Eva Green!

Ben Darlington comes from a long line of foxhunting men and women. Darlingtons have been following hounds since the late nineteenth century when Sir Henry Clayton Darlington hunted with the Lunesdale pack in Cumbria. Continuing family tradition, Ben hunts as much as he can and has his Blackmore and Sparkford Vale buttons. Ben loves looking after people, and he reckons the secret is in the detail. He's always on the lookout for ways to put the icing on your holiday cake.

Blackthorn and Brook has struck on a grand idea. Whether it is foxhunting or a riding holiday that tickles your fancy, they make your trip happen with grace and ease.