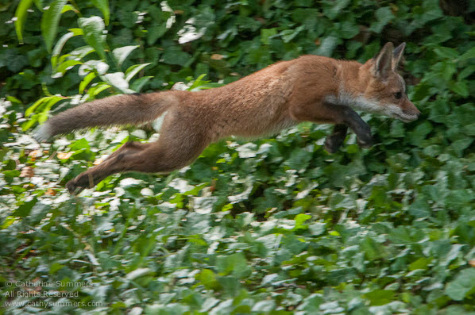 The red fox (Vulpes fulva) is one of the best-known characters in history and legend, widely spread over the temperate and northern regions of the world. For its combination of beauty and grace and intelligence it has had the attention of artists, poets, and naturalists, and merits the attention of those who would read the signs of the out-of-doors.

On January 30, 1841, Henry Thoreau wrote in his journal: “Here is the distinct trail of a fox stretching a quarter of a mile across the pond. Now I am curious to know what had determined its graceful curvatures, its greater or less spaces and distinctness, and how surely they were coincident with the fluctuations of some mind, why they now lead me two steps to the right, and then three to the left. If these things are not to be called up and accounted for in the Lambs Book of Life, I shall set them down for careless accountants. Here was one expression of the divine mind this morning. The pond was his journal, and last nights snow made a tabula rasa for him. I know which way a mind wended this morning, what horizon it faced, by the setting of these tracks; whether it moved slowly or rapidly, by the greater or less intervals and distinctness, for the swiftest steps leave yet a lasting trace.”

The red fox has a variety of calls, variously described as squalling, screaming, and barking, and of course each has its own significance. I do not know the purpose of the red fox bark, unless it may correspond to the howl of the coyote. At least on one occasion, when three of us who were boys in Minnesota came upon a fox den in the woods, the outcry from the parent foxes was clearly a protest, an expression of alarm at our intrusion. It was a combination of a sharp bark and scream, harsh and penetrating. This was quite different from, more shrill than, the regular bark.

The trail of the red fox is traditionally known as a line of dainty footprints in an almost straight line. This is largely true; but, as in the trails of other animals, the pattern varies greatly with the gait and speed. In the almost straight line of the walking pattern the trail may be not more than 3 ½ inches wide; sometimes, at a different speed, about 4 inches. The width of the coyote trails in similar patterns is from 4 to 6 inches. 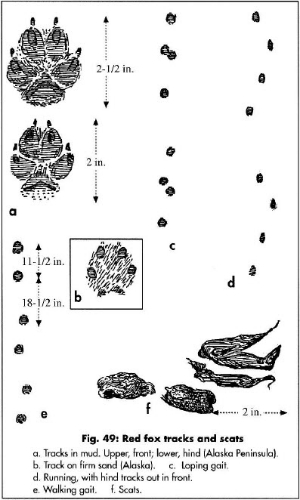 When contemplating the dainty form of the red fox tracks, note also the difference between the wide, sprawling front-foot print as contrasted with the narrower, more pointed hind-foot print. Some prints, especially in a shallow, firm snow or similar medium, show only the portion of the toes and heel pad that protrudes from the hair (Figure 49b). In such prints the heel pad appears to lie far behind the toes, without the lobe extending in between the two hind toes as in dogs and wolves. However, in deeper snow and in soft mud, the entire pads, including the portion covered with hair, make an impression, and then we get a track (Figure 49a) quite comparable to that of a small dog or coyote, or other foxes.

The red fox track has one good characteristic that is distinctive if you have a track showing details. The heel pad has a transverse, arched, raised bar protruding from the hair of the foot, as shown in Figure 49a. In shallow snow, or otherwise a firm surface, this bar may show without the rest of the pad. Then you get a print something like Figure 49b, with a whole bar, or only two ends. In deeper material the bar makes a little groove in the bottom of the heel-pad print.  It is important to keep in mind this foot structure in order to interpret red fox trails properly.

Red fox scats vary greatly in size and appearance, depending on the quantity and kind of food eaten. The samples illustrated in Figure 49 are representative, showing that they have the general form of scats of any of the Canidae. The variation in size, moreover, makes it difficult to identify some samples, for they may be confused with those of the gray fox in eastern states or with the Arctic fox in some parts of Alaska, not to mention the coyote in the lands in between. Normally, however, coyote scats will definitely be larger.

Foxes dig their dens in a variety of places: in the woodlands of the eastern states or on the open plains of North Dakota. They have been known to make their home in a hollow log, and sometimes they excavate an old woodchuck burrow. Such dens may be identified by tracks in the neighborhood, or by fox hairs clinging to the entrance. There is also a distinctive scent that some people are able to catch. I, for one, am not able to distinguish it from the coyote scent, though of course, it must be different. Francis H. Allen once told me: “I have often smelled the fox scent at some distance from any den. It resembles skunk but has a different quality and is not so strong.”