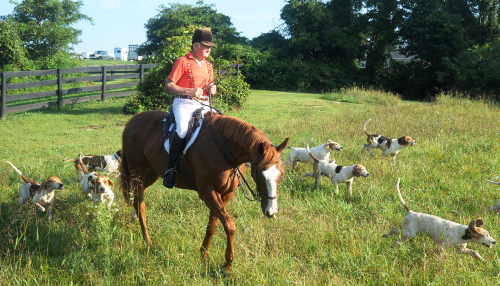 World-renowned huntsman Melvin Poe celebrated his 93rd birthday Sunday, August 25 by doing what only comes natural to the living legend—going foxhunting. Riding his favorite hunter and surrounded by Peggy, his wife of some fifty years, his four daughters, a bevy of grandchildren, neighbors, and friends, Melvin handled the horn and the reins with the cool confidence of a man one-quarter his age at what had to be a historic hunt.

"I can't believe he's still going strong," said Charlie Matheson, former president of the Orange County Hounds where Melvin served as huntsman some three decades. "He's an amazing man. We're so lucky to have him."

Melvin Poe was born in rural Hume in northwest Fauquier County, Virginia in late summer 1920. Following the footsteps of his father Ollie, Melvin grew up riding and hunting, following hounds of family and friends around fields and forest of his virtually limitless neighborhood near the center of the tiny village. During his career with organized foxhunting clubs, Melvin was whipper-in then huntsman at the Old Dominion Hounds and from 1964 to 1991 was huntsman for the Orange County Hounds. He "retired" in 1991, but was huntsman for the private Bath County Hounds until that hunt ceased  operation two years ago. In 2011, Melvin was inducted along with baby brother Albert to foxhunting’s hall of fame—the Huntsmen's Room at the Museum of Hounds and Hunting.

“I've literally spent all my hunting life around Melvin,” said Matheson. “I'm glad to be able to share today with him...very nostalgic.”

After riding all morning, friends gathered at Melvin and Peggy's farmhouse for cake and to discuss Melvin’s secrets to nearly a century of success. Besides his legendary hunting abilities, comments by some of his well-wishers this day put his enormous personal popularity into clear focus.

“I think it's pretty simple,” said Leroy Ryan, professional whipper-in to Melvin from 1956-1963 when Poe was huntsman at Old Dominion. “Melvin's a people-person all the way. He gets along with everybody, and if he doesn't know you when he comes into a room, he'll know you when he leaves.”

“Melvin is totally different than other huntsmen,” said daughter Bridget Paradise, ex-MFH of the Long Lake Hounds (MN). “He wants [the field] right up with him, not hundreds of yards back. His pure joy is to share his love of hounds and sport with others.”

Writer Jackie Burke, who hunted behind Melvin at Old Dominion and Orange County, was holding a gate open for him after a group of riders had wandered away from the covert. “Now that all the chattering people have moved off, maybe the fox will run out,” she said to him. Melvin laughed and said, “I hope not. No one would get to see him then.”

“That's what I think is most unique about Melvin Poe,” said Burke. “He's always known that first and foremost he's in the entertainment business. He tries to make it fun for everybody."

Longevity? “There's no secret to it," Melvin said. "I don't do some things that other people do. I don't drink coffee; I don't eat sugar and salt much, or drink whiskey. It's a long time spent outside, doing what you love. That's all.” 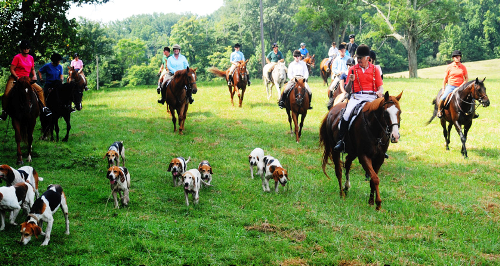 # Guest 2015-07-21 06:59
What a wonderful family and story, I was lucky enough to have stayed with Melvin and Peggy and the girls some 30 years ago on a hunting holiday from the UK. One of my first questions when sat down after an evening meal, I asked Melvyn what the seasonal talley was ?? not understanding the question he asked what I meant ? How many foxes do you despatch in a season? His reply "HELL WE DON`T KILL FOXES, WE JUST CHASE EM"!! That has lived vividly in my memory ever since, I do hope Peggy and the girls are all well, a period of my life I will never forget, thank you all.
Reply
Refresh comments list
RSS feed for comments to this post