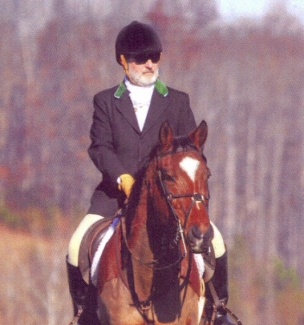 I wasn’t fortunate enough as a child to have horses or to be from a horsey family. However, we lived in rural Cleveland County, North Carolina, where a great many people had horses. Being the son of the local Baptist minister, I knew everyone in the community, and, between the ages of eight and thirteen, I was allowed to ride the horses of various church members. At the age of ten or so, I distinctly recall telling Carl DeBrew that I wanted to foxhunt when I grew up. I lived next door to Carl’s wonderful grandparents, who had a true family farm. They enriched my childhood more than any other people, including my own grandparents. Mr. Lee and Miss Carey DeBrew treated me like one of their own grandchildren, and I was allowed to ride their mule anytime I wanted (when it was not working!). Carl had two horses and was great about letting me ride them.

+1 # Marianne Sobchak 2011-01-25 06:33
I did not hunt this season since my field hunter has soundness problems. I am also not a great fan of country music either. The best money I spend was buying this CD. Once the sound of the hunt came out I was back in the hunt field. I laughed, cried and remember all my wonderful horses and those wonderful runs. I also agreed with many of the lyrics. I give this CD four stars. Thank you, Edwin! Marianne, Bull Run Hunt
Reply
Refresh comments list
RSS feed for comments to this post