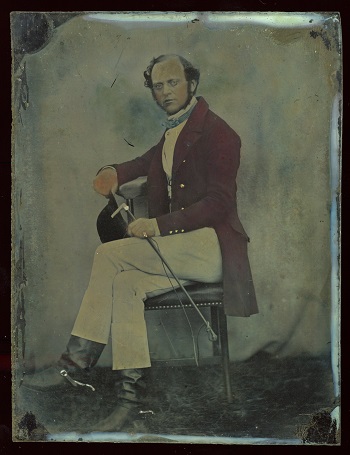 A long time collector and researcher of early photography, Wright's collection consists mainly of daguerreotypes covering the five-year period from 1839 (when the process was first introduced) to 1843. Wright discovered this photograph, an ambrotype, in a lot of early daguerreotypes that he purchased from a Scottish country house sale.

On the back of the framed photo appears the date 1855 and the name of the subject. The surname is somewhat difficult to make out, but the proud young man, booted and spurred, whip and cap in hand, would be John Fred Garper as best it can be deciphered. Wright claims to know all the major sources for daguerreotype and ambrotype (a later process) images and says he has never before come across an image of either process with English-style foxhunting subject matter.

The Lad and The Huntsman

What follows is the author’s Introduction to his forthcoming book, Chappie: color cover, black and white illustrations, about 6 x 8-1/4 inches, $45.00 USD (price includes postage), release date August, 2016. Fifty copies will be printed; half are already pre-sold. Click for purchase instructions. One morning in the early 1960s, a young lad took a day off school to go hunting; he had planned it down to the smallest detail. Hounds were meeting in the Troutbeck valley at 9:30, but that was on the other side of the 1601-foot-high fell known as Wansfell Pike. As usual he left home about 8:15 am but instead of heading for the playground near the church to meet his mates and play football, he turned left at the Salutation Hotel and took the road for Wansfell.

The Cad, Part I

Martha wrote this story after studying The Life of an American Sportsman: Being Reminiscences by Harry Worcester Smith during the course of her 2016 John H. Daniels Fellowship at the National Sporting Library & Museum in Middleburg, Virginia. I’m not sure that many people would have characterized Harry Worcester Smith as a good-for-nothing “cad.” On the other hand, neither might they have called him a gentleman. He was highly opinionated and he had a temper. He had a wicked sense of humor and he suffered no fool. He was a scalawag, a bit of a braggart, maybe a knave, possibly a scoundrel. It’s perhaps divine providence or poetic justice that his favorite horse, his horse-of-a-lifetime, was named “The Cad.”

Martha wrote this story after studying the unpublished manuscript, The Life of an American Sportsman: Being Reminiscences by Harry Worcester Smith, during the course of her 2016 John H. Daniels Fellowship at the National Sporting Library & Museum in Middleburg, Virginia. (Part I was published last month.) 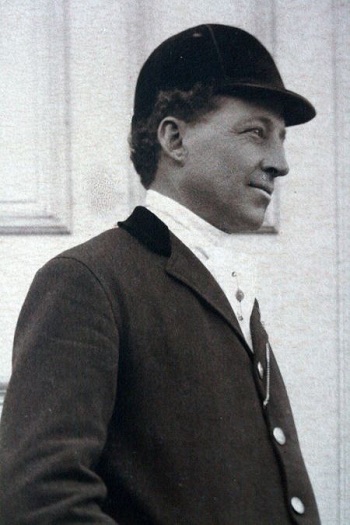 Harry Worcester Smith in hunting attire, circa 1910, from the Harry Worcester Smith Archive (MC0041), National Sporting Library & Museum.Undeterred by his spills the spring and summer of 1900, and against everyone’s advice, Harry entered The Cad in the $10,000, three-and-a-half mile Champion Steeplechase at Morris Park (in what is now The Bronx, NY), Saturday, October 6, 1900. Ollie Ames met him at the clubhouse that Saturday morning.

“You are not going to run The Cad are you?” Harry recalls Ollie saying. “He’ll break your neck!” Next, Mr. B. F. Clyde of Philadelphia admonished him, “Now, look here, Harry Smith, I have seen you ride a great many times around New York, Philadelphia and Saratoga; I have the greatest admiration for you as a sportsman, in fact I am very fond of you. Now, Please don’t take your life in your hands and ride The Cad today against all those professionals.” It seems Mr. Clyde had his money on another horse; Harry thanked the man and walked away. “Then, about noon,” Harry writes, “a Western Union boy came up and handed me a telegram. It was from Mrs. Smith: ‘Don’t ride, get best professional possible. Signed, ‘Mildred.’”