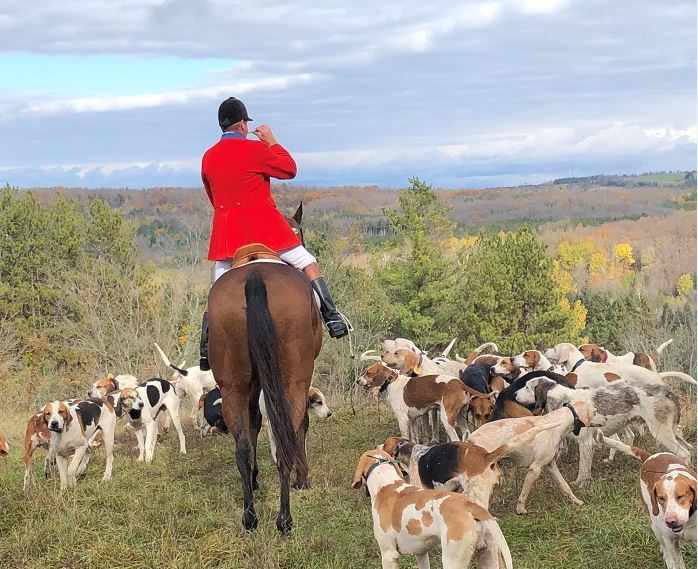 Eglinton and Caledon Hounds with current huntsman, Mark McManus.The Eglinton and Caledon Hounds (ON) have long been noted for excellent live hunting. Drag hunting has been considered on occasions, but the decision has always been made to stay with pursuing the plentiful live coyotes in the hunt club’s southern countryside. It is not surprising then that the one attempt to incorporate some drag hunting with live hunting did not go according to plan.

The occasion was at one of the meets during the highly successful Ontario Festival of Hunting. The biennial Festival was spearheaded by the late Walter Pady, MFH of the Toronto and North York Hunt with the support of the five Ontario and and Quebec clubs during the 1990s and early 2000s.

# Judith Wilson 2018-12-06 15:45
A wonderful read! Thank you, Norm, and thank you, Mr. French! I've had the pleasure of hunting with Eglinton and Caledon and trail riding the Mono Cliffs. I can see in my memory the places described here! And just this morning, I had the thrill of judging at Aiken Hounds' Drag Hound Performance Trial at Belle Meade, so I can also relate to the rush that Derek and Sam felt when they heard hounds fast approaching!
Reply
Refresh comments list
RSS feed for comments to this post