Details
Hunting Days of Yore
By Knight A. Kiplinger 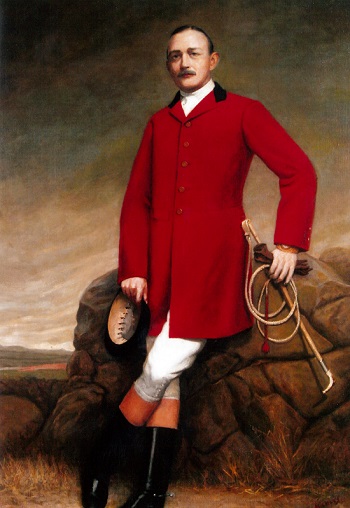 Clarence Moore was MFH of the Chevy Chase Club from 1899 to his death in the waters of the Atlantic in 1912. "A man of staggerying wealth," Moore was bringing foxhounds back from England when the Titanic struck an iceberg and sunk. He perished after remaining aboard to help women and children into lifeboats. / Image courtesy of the Chevy Chase ClubGood morning. I’m Knight Kiplinger, and it is my privilege to be a member of both the Chevy Chase Club and the Potomac Hunt, which are collaborating today in presenting this exhibition of foxhunting here on our Club grounds. The reason that our celebration with horses and hounds is so appropriate is because the Chevy Chase Club was first founded as a foxhunting club.

Not as a golf club, like Washington Golf in Arlington, which is two years younger than we are but was founded for golf. Not as a tennis club, although tennis came to Chevy Chase in 1895, just three years after our founding. Our club was founded by gentlemen members of the Metropolitan Club downtown, who rode horses for pleasure and for sport. For the first three or four years after the Club’s founding in 1892, its sole activity was riding to hounds across the vast expanses of rural northwest D.C. and Montgomery County, Maryland.