Drag Hunting: From Racing to Simulating the Hunt 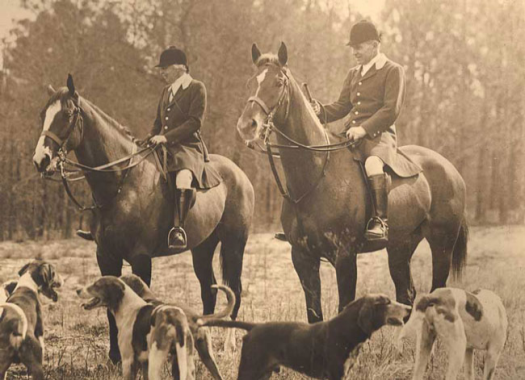 Drag hunting was once a gloriously competitive sport, the roots of which go back to seventeenth-century England. During the reign of King James I (1603–1625), it began as  a sport known as running a train scent. A “drag was laid, hounds were put on the line, and ran it at a racing pace. The horse in the lead at the end of the drag was declared the winner,” wrote the late Alexander Mackay-Smith in his Foxhunting in North America.

Later in the same century, during the reign of King Charles II (1649–1685) , a gentleman could enter his hound or hounds to compete for the Woodstock Plate, a race for hounds following a four-mile drag as a test of both the hound’s speed and its ability to follow a scent. When houndsmen and spectators discovered that the best and, not incidentally, the most enjoyable way to follow the hound race was on horseback, the sport of drag hunting was born according to John Philip Hore in his History of Newmarket.

Even Hugo Meynell, the father of modern foxhunting, played his part in drag-hunting history when, in 1763, he participated in a celebrated hound match in the form of a drag hunt between his Quorn Foxhounds and those of Mr. Barry’s Cheshire Foxhounds. By the nineteenth century, the notion of a guaranteed, sustained gallop over jumps appealed to many sportsmen, especially those who mainly hunted to ride.