The North Tipperary at Loughton House 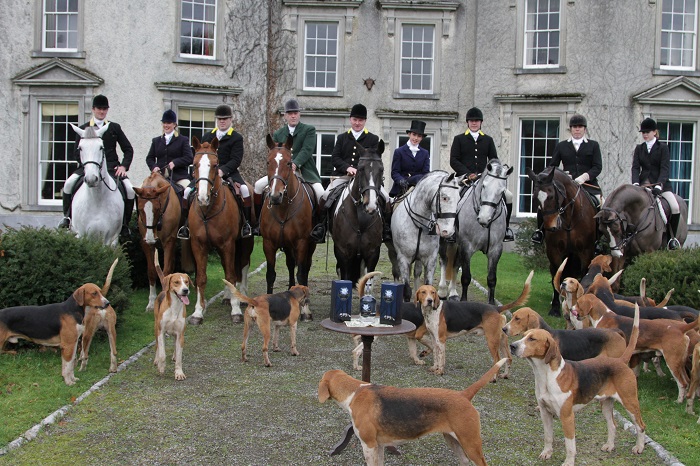 Visitor Tony Holdsworth, retired huntsman for the Duke of Beafort's (UK) wears the green livery of his former hunt. Center is Denis Gilmartin, Master and huntsman of the North Tipperary. To the right on the gray is Rose Scanlon, mounted side-saddle. To the right again, on the gray and bay horses, are Loughton House hosts, Dr. Michael Lyons and Dr. Andrew Vance, MFH.  /   Catherine Power photo

It’s been a couple of seasons since we were with the North Tipperary Foxhounds (IRE). A visit was overdue, so when we heard through Arabella Scanlon whom we met last year in East Clare that a very special lawn meet was upcoming at Loughton House, we jumped at the opportunity. Set in more than a hundred acres of fabulous park and farmland in the small village of Moneygall, the eighteen-bedroom estate straddles the Tipperary-Offaly border and, likewise, the border between the North Tipperary and Ormond hunting countries.

Loughton is just a stone’s throw from Barak Obama Plaza. The U.S. President, traveling in the footsteps of his mother’s family, visited Moneygall in 2011. St. Hubert's stag and the crucifix atop the medieval tower at CurraghmoreOpening meets are always special, but when it is at Curraghmore for the Waterford Foxhounds, and a lawn meet to boot, it goes beyond special. Indeed, the hunt was originally known as the Curraghmore Hounds. The estate is steeped in all things of the horse. Even as we drove in the long avenue (it must be more than a mile), race horses were being unboxed and tacked up on the gallops and schooling grounds which are widely used by trainers in that part of the country.

Curraghmore is the historic home of the Ninth Marquis of Waterford. His ancestors through his maternal line, the de la Poers (Power), came to Ireland from Wales with Strongbow and the Normans around 1170—about a century after the Norman invasion of England and about 320 years before Columbus ‘discovered’ the New World.

In Praise of the Penn-Marydel While packing hounds to the first covert on an autumn hunting morning a couple of seasons ago, I quickly noticed the absence of spider webs laying in the morning dew that so often are the bane of scenting here in the excessively drained sandy soils of my hunting country. Sure enough that harbinger proved accurate when precocious ten-month-old Dooley opened on riot, indicating that scenting conditions were indeed optimal. Whippers-in were out on point, so I had to break out my shooting iron to get the attention of the easily swayed new entry that joined the persistent Dooley.

After counting all twenty-five-and-a-half couple and telling them how disappointed in them I was, I moved from Manly Crossing and recast them into Cow Head. That particular cast was mostly to settle them down and perhaps jump another deer, as that location offers the opportunity for quick correction.

Hunting In the Footsteps of Irish History Thirteenth century Liscarroll Castle in the Duhallow hunting country, near the site of the Battle of Liscarroll in 1642.

There are certain days that stand out in the sporting calendar, Gold Cup day in Cheltenham, Aga Khan day at the Royal Dublin Show, the Maryland Hunt Cup in the USA, Munster final in Thurles (especially if Cork and Tipperary are playing), but ranking at least equal to any of these must be a meet of the Duhallow in Liscarroll. The Duhallow kennels are nearby, and huntsman Ger Withers is a native of the parish so it could be described as their spiritual home. As if all this weren’t enough, longstanding hunt chairman Pat Fleming farms nearby, and the Flemings have been farming in Liscarroll since the Battle of Liscarroll around 1642.