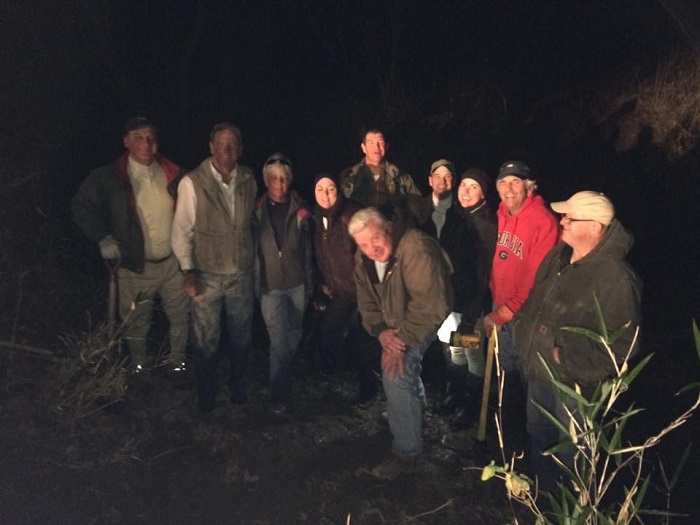 What a day! I arrived at 11:30 last night—six and a-half hours instead of four hours. Siri always thinks I can drive from Tennessee to Judith and Epp Wilson’s in Georgia in just four hours, but I know better. There is a little place called downtown Atlanta that Siri ignores. I always add an hour for the twenty miles it takes to go through downtown. Well, last night Fate gave me a clear run at fifty miles an hour though downtown on a Friday night, hauling my trailer. Holy crap! On a Friday night! I actually saw pavement between cars!

But Fate screwed me on everything else: construction delays, insane fuel stops, so I arrived very late. But today made it all worthwhile. After sleeping in (heaven), Judith and I took their three-month old Crossbred puppies for a long walk this morning, a horseless trail ride. It was the two of us, the foxhound puppies, her Gracie and Marty house dogs, and my Holly. Who was in heaven. And worn out. She’s going to sleep for a week.

Then we went foxhunting this afternoon. Belle Meade and Tennessee Valley have always had great joint meets at Belle Meade. Somehow, our Penn-Marydels and their Crossbred hounds hunt amazingly together.

Duhallow Foxhounds at Kilbrin: The Oldest Foxhound Pack in Ireland Duahallow huntsman Ger Withers / Catherine Power photoFounded by the Wrixon-Becher family, the Duhallow foxhounds have been hunting North Cork from the Kerry border to Doneraile continuously since 1745 making it the oldest foxhound pack in Ireland. (For those who question how to reconcile that with the Scarteen, the recorded history of which goes back to the early 1700s, the keyword is “foxhounds.” The Scarteen Black and Tans are technically known as Kerry Beagles, though they dwarf any beagles we know today.)

The Duhallow pack existed before 1745, but there is no recorded history. That year, Henry Wrixon of Ballygiblin rented a fox covert, Regan’s Break, for thirteen guineas. Henry passed the pack on to his son, Colonel William Wrixon, who in turn passed it on to his own son. In 1800, Sir William Wrixon Becher, MFH met with several other gentlemen to form a club to be called the Duhallow Hunt Club. Sir William had taken on his wife’s maiden name, Becher, she from the same family for which the infamous obstacle on the Grand National Steeplechase course at Aintree, England, Becher’s Brook, is named. On a hot midsummer afternoon, huntsman Matthew Cook rode up to meet me on a green John Deere lawn mower. Cutting grass is just part of the work it takes to maintain the grounds and kennels at the Farmington Hunt Club (VA), home to sixty noisy, rambunctious foxhounds.

Coming to Farmington in the summer of 2013 from the Los Altos Hunt in northern California, Cook faced a new set of challenges, both in topography and local culture. He was learning his new job in the shadow of the forty-year reign of the revered Jill Summers, MFH, whose practice and policy of hunting only foxes laid the foundation for Farmington’s hounds. The pack was bred and trained to ignore anything non-vulpine. 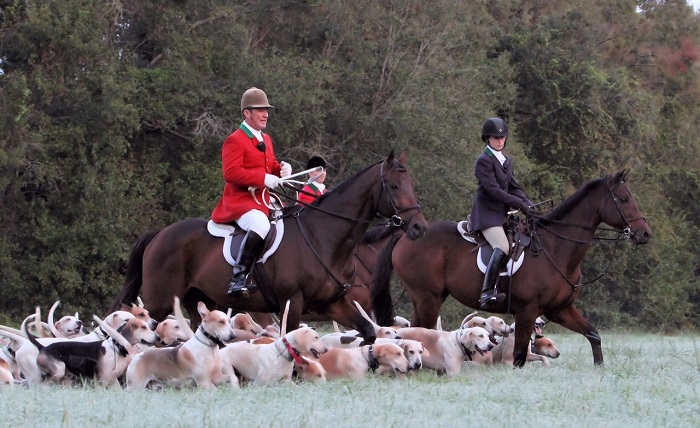 Marty’s Weather Channel said no way but my Weather Bug gave me hope, and hope springs eternal! It looked highly likely that we might have to cancel due to heavy rain and possible thunderstorms, but, never wanting to cancel unless totally necessary, the call was made at 5:30 a.m. to go for it.

We were in the saddle at 8:30 and headed for the Dip Vat. What a shame, as it turned out, that so many were put off by the weather prediction of three inches of rain, to have only two in the field—Cameron and David Reid. “Small field, good hunt” could not have been more true!