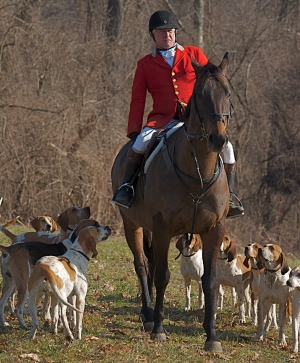 Radnor huntsman Joe Cassidy and hounds at Big Bend  /  Diana Rowland photoThe gray uncertain sky and falling barometer suggested that winter was not yet finished with us. Nevertheless, I had rearranged my previously planned trip to Aiken after Joe Cassidy called. Joe hunted Mr. Stewart’s Cheshire Foxhounds (PA) for eighteen years and is currently huntsman for the Radnor Hunt (PA). This was an opportunity for me to hunt in his back pocket.

Joe had taught me to hunt hounds while I was MFH at Loudoun Hunt (VA), and he hunted with me when I carried the horn for a couple of years, making the drive with his wife Leslie and their very large dog Luca each weekend.

The meet was at Big Bend, the long-time residence of Frolic Weymouth, well-known for his immense contributions to open space conservancy. It was a Saturday meet, March 16, 2013, and as we sat waiting for the last of the field to mount and the clock to strike 11:00, Joe turned in his saddle, handed me his horn, and quietly told me that I was hunting the pack that day. I confess to a moment of stage fright, made some knuckle-head comment about strike hounds to which he replied, “Really,” and then we headed off to the first covert—a thick patch of brambles, ground cover, and trees about the size of a football field.