When Photographer, Horse, and Camera Go Head Over Tail 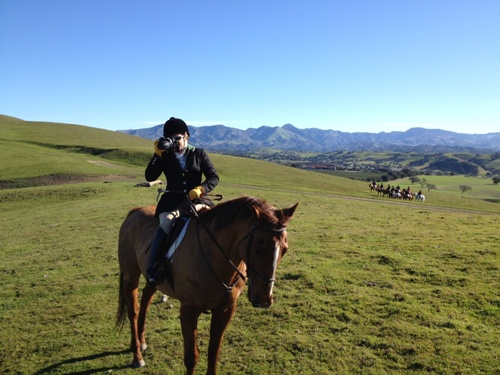 Gretchen Pelham’s photos have been published in numerous magazines, in Foxhunting Life, and in our annual Foxhunting Life Calendar. After telling her I was impressed that she could juggle reins, hunt whip, and camera, she said that when she rides her own horse, she uses double reins! But, she said, the whip is useful. When taking pictures, she puts it under her leg, horn up, and hooks the reins over it. That way, she can use both hands on the camera! [Ed.]

I don’t have a picture of my whopper of a cropper in the hunt field, mainly because I was the one taking the pictures. I always hunt with my Canon 20D equipped with a 300mm zoom lens shoved down the front of my hunt coat. When I see a moment worthy of a shot I put the reins in one hand, drag the camera out, and start shooting.

Sometimes I have plenty of time to shove the camera back down my coat before my Field Master takes off, but mostly I’ve learned to shove it down with one hand while breaking into a gallop. The coat really holds the big camera steady, and I can jump anything without fear of the camera coming out and clocking me on the chin.

+2 # Gretchen Pelham 2013-04-17 14:03
I impressed Norm - cool! But I bet he wouldn't be so impressed at how I cuss, grumble and whine every single time (about a hundred each hunt) that I have to pick up and sort all the stuff in my hands during a hunt. I'm not very quiet, proper or lady-like about it. There is a reason why I didn't do well in my short-lived dressage career.

Reply
# William Gamble 2013-04-25 10:22
Very lucky! I limit my hunt transport to car and foot, so I'm amazed at what you accomplish mounted. As a fellow Canon user, I'm happy to know the gear is really almost bulletproof. Wish you a speedy recovery.
Reply
Refresh comments list
RSS feed for comments to this post