The Horsemen of Wexford 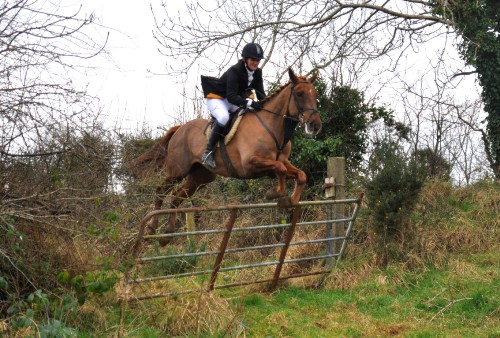 Lillian Doyle, five-times ladies point-to-point champion, out with the Wexford from a meet at her father's pub / Noel Mullins photo

What better place to end the season than with the Wexford Foxhounds at John Jude Doyle’s Cloch Ban Pub in Clonroche, County Wexford? Inside there is a picture on the wall of Bree Foxhounds Joint-Master Jay Bowe having a drink sitting on his horse beside the bar!

Doyle is a director of The Irish Horse Board and Horse Sport Ireland, and one can see why. He has an infectious enthusiasm about the Irish horse as a breeder, producer, and organiser of schools, shows, and gymkhanas. He has campaigned his Irish Draught mare Cloghbawn Cailin and her filly Cloghbawn Liaght on the show circuit. Doyle’s daughter Lillian won the Ladies Point-to-Point Jockey Championship five times. His uncle Jim Joyce bred Parkhill, evented by the late Col. Ronnie MacMahon, and his track greyhound Temple na Dubh won seven nights in succession in Shelbourne Park!

Master and huntsman Mary Kehoe is gifted as a handler of horses and hounds and has hunted the Wexford Foxhounds for nine seasons and the Bree Foxhounds for the last twenty-three seasons, hunting hounds four days a week. Her sister Muriel whips in to her. Their father Owen was Field Master of the Island and hunted the Bree. The other whippers-in are Michael Condon, a formidable rider, and former jockey Padraig English, who won three races on the great steeplechaser Danoli. All of them hunt across country on a simple mathematical principle: the shortest distance between two points is a straight line, and whatever obstacle is on that line is crossed regardless of complexity! But they can because they produce and ride only the very best hunt horses.