Hale-Bopp and the Foxhounds 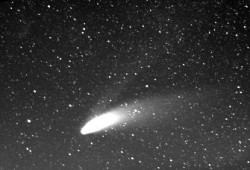 The inhabitants of the Lake District, home to the venerable foxhunting foot packs of Cumbria, have always been superstitious, their lives governed by beliefs and ritual to prevent bad luck. There were many beliefs, but the one I remember best is that in Wasdale a mother did not wash a baby’s arms until it was six months old. This, it was believed, would stop the child growing up to be a thief. As time passed, superstition of events and the cause of happenings became less, or did it?

On July 23, 1995, Alan Hale in New Mexico and Thomas Bopp in Arizona discovered, independently, an unusually bright comet outside of Jupiter’s orbit.

Now the approach of this comet in 1997, which became easily visible to the naked eye in the night sky, did not register on the radar of Pete who only saw stars after closing time, and would never dream of looking to the heavens anyway on his way home from the pub up the streetlight-less road. As the comet neared the sun it became brighter still in the night sky, and the talk in the billiard room was of nothing else. Even hunting took second place.