The East Down Foxhounds: Wearing the Saint Patrick's Blue 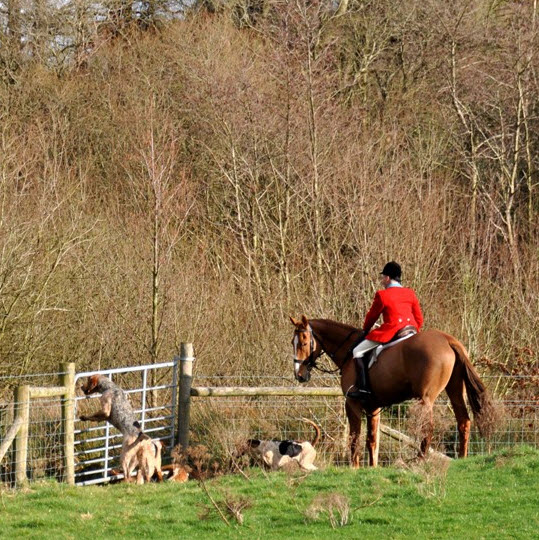 Huntsman Declan Feeney  /  Noel Mullins photoSaint Patrick arrived at Strangford Lough in 432 AD from Wales. He quickly converted the local chieftain Dichu, who gave him a barn in which to hold his services. On the site known as the cradle of Irish Christianity on the Hill of Saul (meaning Patrick’s Barn, or in Gaelic, Sabhall Phadraic), there remains today a church and round tower where services are still conducted each Sunday. Saint Patrick died on March 17 in 461 AD, and his remains are interred in nearby Downpatrick Cathedral.

The East Down kennels are in County Down, on the outskirts of the village of Seaforde, southeast of Belfast in Northern Ireland. Hounds were originally kennelled there by the Forde family from 1768 to 1837 and were known as Mr. Forde’s Hounds. They later became known as the Lecale Hounds, and subsequently the East Down Foxhounds. The hunt members wear the St. Patrick’s blue collar.

# Marianne Sobchak 2012-03-22 23:47
Ireland is always so green. What a beautiful photo.
Reply
Refresh comments list
RSS feed for comments to this post