The Galway Blazers at Craughwell 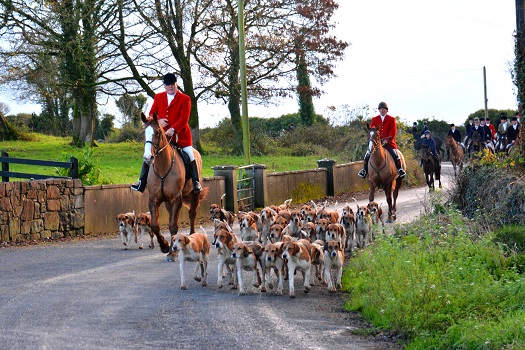 The County Galway Foxhounds (the Blazers), hunted by Tom Dempsey, had a brilliant day's hunting at Craughwell, finding five foxes and running each one to ground.

The hunt was formed in the early nineteenth century and hunts about thirty square miles of unique limestone wall country. The first Master and huntsman was John Denis, an ancestor of the late Lady Molly Cusack-Smith, MFH, who, neé Molly O’Rourke, hunted the Blazers during World War II. There were many other well known Masters, including Isaac (Ikey) Bell, father of the modern English foxhound; American film director John Huston; and Captain Brian Fanshawe, one of England’s illustrious Masters (Warwickshire, North Cotswold, and Cottesmore) and renowned breeder of foxhounds. Two Field Masters that held office for long periods were Lady Anne Hemphill and Willie Leahy.

The Galway Blazers have some of the very best hunting country in the world. To say it is unique is an understatement, with miles of small enclosures, resulting in often fifty stone walls to the mile and uninterrupted views of hounds hunting. To hunt even once with the Galway Blazers is on most hunt followers’ bucket list.