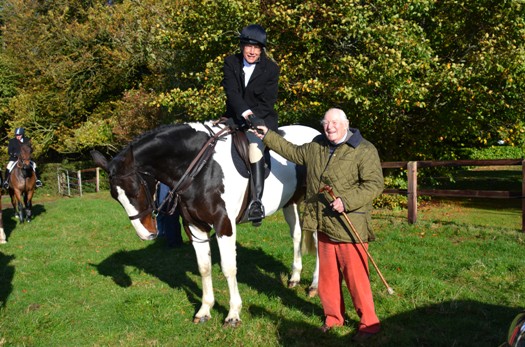 If there were a title of Grand Master of Hounds in our hunting world, George Briscoe would certainly fit the bill. This season George Briscoe hosted his seventy-fifth consecutive opening lawn meet of his beloved Tara Harriers at Craystown, County Meath. The occasion marked his seventy-first season as Joint-Master, making his period as Master and for a time huntsman a world record. Especially when you consider that the majority of the hunt followers were not even born when he succeeded his father in the Mastership in 1942 at age twenty-one.

George is one of nature’s gentlemen, with a broad welcoming smile, a kind word for everybody, and unbounded passions for hunting, the farming community, and the Tara Harriers. He never misses an opportunity to remind followers of the illustrious history of the Tara Harriers. His sitting-room window looks out onto the Hill of Tara, the royal seat of the High Kings of Ireland—probably the most important ancient site in Ireland, the history of which goes back as early as 5,000 BC. George has penned two books on the life of a country gentleman which is a record of life around the big house, hunting, shooting, and fishing, as well as a few racy references just for good measure!

George was a great friend of Betty Bird and her husband Charlie, who was Joint-Master of the Meath Foxhounds from 1956-59 when George was hunt chairman. Later he hunted with the Bird’s home pack, Mr. Stewart’s Cheshire Foxhounds in Pennsylvania, USA. Interestingly one of George’s neighbours, Anne Kelly, left Ireland to work with Betty Bird producing horses for showing and hunting and settled in Pennsylvania. She married racehorse trainer Michael Moran whose mother Betty owned the Aintree Grand National winner, Papillion.  Anne is now a Joint-Master of Mr. Stewart’s Cheshire Foxhounds.