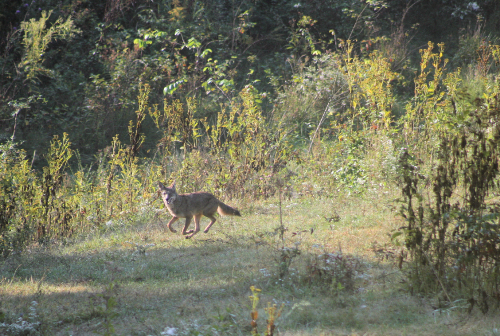 I was standing on the line with my helmet off, pointing into the woods after the coyote. The lead hound, Ariat (a black and tan Penn-Marydel), came up the little rise and opened when she hit the line true. The rest of the pack was with her and off they went. Only a few seconds later, huntsman Ryan Johnsey flew past us over the coop next to our gate.

I was leading what I dubbed the Pony Field at our cub hunt at Tennessee Valley Hunt’s Big Valley fixture. I had only two other members in my field, but all three of us were on ponies. One of the girls was a junior, and the other had turned eighteen only a few months earlier.

I decided to stay out of the woods and follow the lake’s edge since the coyote had been circling around the whole day. My junior asked, “Is the coyote circling because this is his home territory? Because if he was just passing through then he would have run straight out of country, right?” Wow. The girls have been listening to me jabber on about hunting!

# Cheryl Microutsicos 2013-10-28 12:31
What a great hunt report, Gretchen! So glad the field you were leading (at a blistering walk LOL) got to view. Often our hilltoppers view. Just goes to show you that you don't have to be galloping and flying around to watch good hound work, hear good music, and have a view now and then!
Reply
# Gretchen Pelham 2013-10-29 12:18
Yes - Hilltoppers often see so much more than the other Flights, as long as their Field Master doesn't get them lost. But, of course, I've never gotten my Field lost. Oh no. This past weekend was our Opening Meet, and my Second Flight took quite a tour of the trails in the 100 Acre Woods. But never were we lost!! We were learning how the trails all circle back to one another on a seemingly endless loop. Yep. It was planned that way.