The Penn-Marydel Is Grand Champion at Virginia and Bryn Mawr 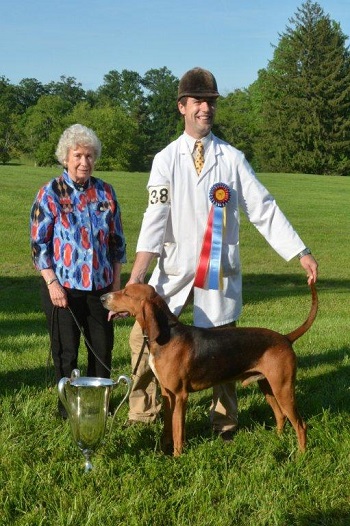 The following weekend, for the first time in foxhound history, the same Penn-Marydel repeated his stunning Virginia victory by being judged Grand Champion of Show at Bryn Mawr.

The Penn-Marydel as a breed is justifiably loved by its admirers for a number of reasons—nose, voice, biddability—none of which includes a reputation as the standard for foxhound beauty. Yet Golden’s Bridge Phoenix prevailed over the usual suspects so often in the Virginia lineup for the final class of the day: Live Oak Hounds (FL), Midland Foxhounds (GA), and Potomac Hunt (MD). At Bryn Mawr, Phoenix topped the other breed champions from the Blue Ridge Hunt (VA), Potomac Hunt, and GreenSpring Valley Hounds (MD). Following in his sire’s footsteps, Green Creek Bankrupt 2013 was judged Grand Champion foxhound at the Carolinas Hound Show on May 10, 2014. Bankrupt’s sire, Why Worry Braveheart 2009, garnered the same honor at the Carolinas in 2010.

Bankrupt is an English dog hound with Duke of Beaufort’s bloodlines throughout the top half of his pedigree. His dam, Green Creek Ransom 2010, was bred by the Live Oak Hounds and goes back in tail female to Mooreland bloodlines with contributions from the Mid Devon, Ledbury, North Cotswold, Heythrop, and College Valley and North Umberland.

A first year hound, Bankrupt entered well and hunts well according to Tot Goodwin, MFH and huntsman. “He’s not the fastest hound,” admits Goodwin. “He’s a middle-of-the-pack hound, but he’s always in there...hard to fault.”