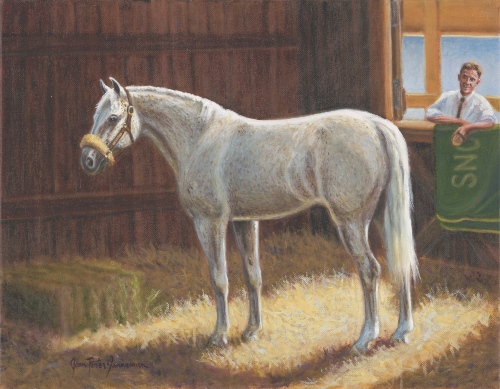 Harry de Leyer’s first look at Snowman was between the slats of the truck bound for the killers. Harry had had trouble with his old station wagon, and he arrived late to the horse auction in the Pennsylvania Amish farming country. It was over, and there was only one trailer left in the parking lot. It was always the last trailer to load.

Midst the fearful and fidgeting horses crowded together on the bare floor for their last journey, one plain-looking gray stood apart for his calmness and self possession. Harry had driven to the auction in the hope of finding an inexpensive school horse for his riding students at the Knox School on Long Island, so he asked the trucker if he could see the gray. The gelding was missing a shoe, had bloody knees, and rubs on his chest from a heavy harness, but he was well-made and had a kind eye. The trucker had paid the “killer’s price” of sixty dollars. Harry was indecisive, but something in the horse’s composed demeanor spoke to him. Harry paid the man eighty dollars—the most he had planned to bid for any horse—and took him home.

# Cheryl Microutsicos 2013-08-21 14:40
I love the portrait, Joan, and I loved the book! What a great story, all around.
Reply
# Tracy West 2013-10-12 20:57
I read the book available on Kindle. It was outstanding. I loved the story of Snowman and the history of show jumping at that time was excellent,too.
Reply
Refresh comments list
RSS feed for comments to this post