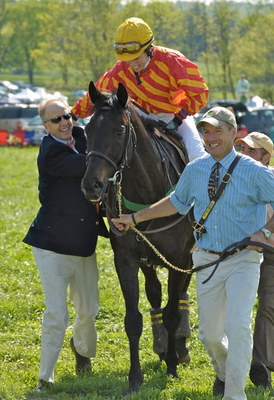 Miller-Davies—former champion jump jock, mother, and trainer—had retired from riding races more than eight years ago. Mark Beecher was to ride Sportsmans Hall’s Private Attack in the Grand National for trainer Alicia Murphy, but was having visa problems in Ireland. Murphy turned to Miller-Davies, and the pair won by a neck.

Meanwhile, Miller-Davies had been training her husband’s horse Fort Henry which she had intended to ride in the Maryland Hunt Cup one week later. The Grand National win changed those plans, and husband Joe Davies, a former three-time winner of the Maryland Hunt Cup, graciously scratched his horse so his wife could ride Private Attack in that race.

+1 # tiffany teeter 2011-05-11 12:26
what about mention of the third finisher !!!michael traurg in nolle bolle. just finishing is a feat !!!
Reply
+1 # Norman Fine 2011-05-11 12:53
Karin Winegar writes:
Excellent job on a topic, as usual, Norm. You are right to cover the thoroughbred industry--also, may I suggest, a bit of coverage on the draft horse industry since everyone over a certain age seems to ride draft crosses.

My lovely thoroughbred, Mine Too, is teaching me more than many of the rest of my horses have taught me. Patience, quietness, subtlety, timing---all things I need to know more about.
Reply
Refresh comments list
RSS feed for comments to this post