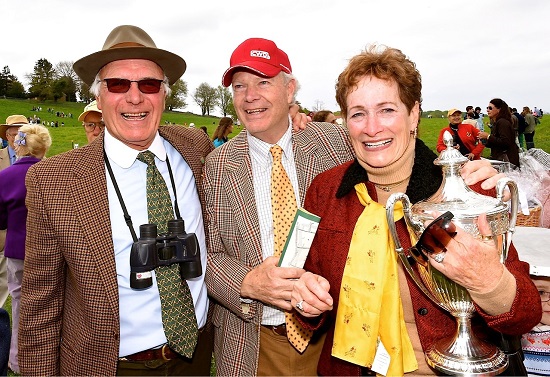 Skip Crawford, MFH, Potomac Hunt (MD) left his golfing buddies and flew home to watch his horse run in the Maryland Hunt Cup. A good decision, as it turned out. With young Eric Poretz in the irons, Senior Senator won the stiffest timber race in the world by half a neck in an exciting finish. The date was April 30, 2016 at Worthington Farms, Glyndon, Maryland.

From the start, Poretz allowed his horse to go to the front and set his own pace, a pace which gave him a lead of as much as twenty-five lengths over much of the four-mile course. “That’s the way Senior Senator likes to run,” said Skip’s better half, Vicki Crawford, MFH. “He likes to be in front.”

The horse sure looked like he makes a lot of his own decisions. On the course, at whatever speed he was running, he seemed to judge distances on his own, meeting every fence well, jumping cleanly, and going away without a hiccup. Maybe Poretz was helping, but if so, it was so quietly and sympathetically, that this scribe couldn’t see it.

# C. Thompson Pardoe 2016-05-26 11:52
An outstanding win for an awesome horse with fantastic connections top to bottom. A real tribute to Maryland foxhunting.
Reply
Refresh comments list
RSS feed for comments to this post