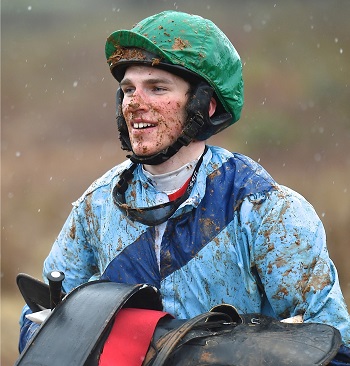 Dylan McDonagh displays evidence of Last Farewell's stretch battle with Plated in the Novice Rider Flat Race -- muddied but victorious. / Douglas Lees photoHeavy flakes of snow mixed with rain saturated the Airlie Racecourse throughout most of the day at the Warrenton Point-to-Point, Saturday, March 19, 2016.

Doug Fout-trained horses won three of the nine races on the card: Open Hurdle and Maiden Hurdle, with Kieran Norris in the irons for both, and the Novice Rider Flat Race with Dylan McDonagh aboard. In last year’s final standings in Virginia, Fout was Leading Trainer and Norris was Leading Rider. 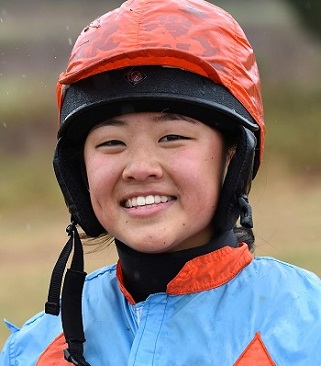 Erin Swope finished clean and bright by winning wire to wire on Slaney Rock in the Amateur/Novice Rider Hurdle. / Douglas Lees photoIn the Amateur/Novice Rider Hurdle, Erin Swope crossed the wire first, just as she did at Blue Ridge the week before, but this time she went to the winner’s circle. Swope—owner, rider, and trainer of Irish-bred Slaney Rock—had lost a weight from her pad during her race at Blue Ridge and had to be disqualified.

This year over hurdles and last year on the flat, her racing strategy has been consistent: explode to the front at the drop of the flag, gain a commanding lead, and win—wire to wire. It was also a good strategy for staying clean this sloppy day!