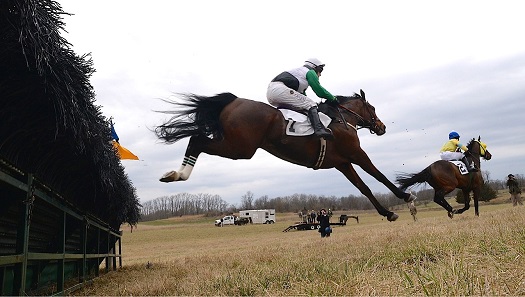 March 12, 2016 saw the sixty-seventh running of the Blue Ridge Hunt Point-to-Point Races going off on the hunt’s normally scheduled weekend for the first time in four years, the three previous race meetings having been postponed because of winter weather conditions. With the weather and the footing close to ideal for horses and spectators alike, the meet, usually the third in the series, also served as the kick-off for the 2016 Virginia point-to-point season.

Jimmy Day-trained entries won two of the three hurdle races: Amateur/Novice Rider with Bruce Smart’s Dai Bando and the Open Hurdle with Daybreak Stables’ Manacor. In the Maiden Hurdle Race, Day's horse, Zol Zayne had to settle for second place, as he did last year in the same race. The Maiden Hurdle was won by Celtic Venture Stable’s Prima Facie, trained by Eve Smithwick, MFH and huntsman of the Snickersville Hounds (VA). Jeff Murphy held Prima Facie to the pace he wanted and patiently stalked the leader much as he rode the same race last year on winner Bedizen. Murphy took the lead from Hardly Patient on the final turn, accelerated to the last fence, and flew it cleanly for a convincing win.