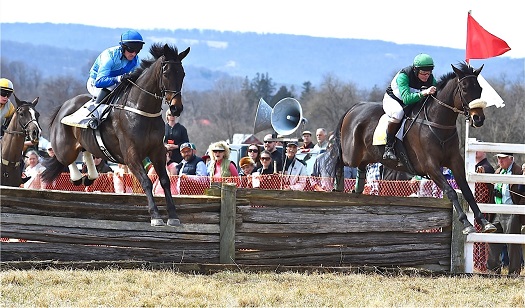 Virginia point-to-point fans were treated to a full weekend of racing on March 22 and 23, 2014. The Piedmont Fox Hounds Point-to-Point went off as scheduled on Saturday and the Blue Ridge Hunt races, postponed from their original date, were held on Sunday. In a spirit of cooperation, races over fences were split so that Piedmont ran timber races and Blue Ridge ran just hurdle (brush) races, thus assuring a good field of entries for each specialty.

In the Open Timber Race, Zulla Road (Woods Winants up) set the pace for the first mile, but Dakota Slew ridden by Robert Walsh took control from there to the wire. Skunked ran a strong second, but Dakota Slew in prevailing notched his second consecutive Rokeby Bowl win. Dakota Slew is owned by Magalen Bryant and trained by Richard Valentine. Ms. Bryant shared last season’s Virginia Leading Owner title with Pennsylvanian Irvin Naylor. Although Winants pulled up Zulla Road in that race, the fourth on the card, he had earlier shown his 2013 Virginia Leading Rider form by winning the first two races of the day, Maiden Timber and Amateur Highweight Timber.