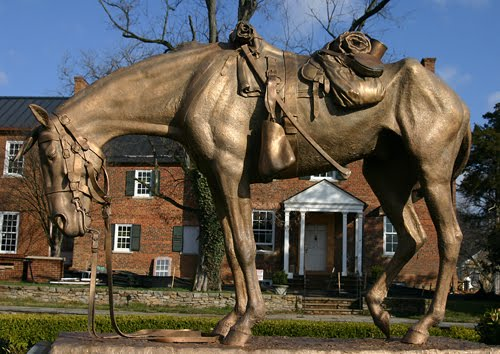 Appalled as we are by the human death and casualty figures resulting from the Civil War, less known is the fact that well over a million horses died in service during that conflict. Many of those horses, belonging to officers and cavalrymen of both sides, must have carried their riders after foxhounds in happier days.

The late Paul Mellon believed that these animals deserved to be remembered, and he determined to create an authentic memorial for them. The result, a product of artistic genius coupled with painstaking research, is an exceedingly moving piece of sculpture. Any foxhunter or horse lover will be well-rewarded by a visit to the National Sporting Library and Museum in Middleburg, Virginia or to the U.S. Cavaly Museum at Fort Riley, Kansas to see either of the two castings from the original mold. (-Ed.)

The sculpture of the war-weary Civil War horse in the courtyard of the National Sporting Library had its origin in the mind of the late Paul Mellon.

In 1994 Mr. Mellon received a book for his eighty-seventh birthday titled The Cavalry Battles of Aldie, Middleburg and Upperville, June 10-27, 1863 by Robert F. O'Neill, Jr. O'Neill had conducted an enormous amount of research through books and newspapers of the period and letters and diaries of the participants that vividly brings those seventeen days to life. Reading of battles and bloodshed of human and horse right in this community had a profound effect on Mellon.